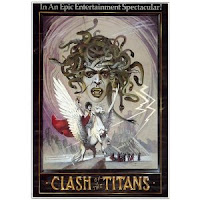 In my last post I talked about the first time I saw George Romero's Night of the Living Dead (1968), which got me thinking about the other movies I remember seeing for the first time. If you're like me, you watch so many movies that a lot of the viewings run together (which is why some of us have film journals to keep track), but other experiences stand out. Perhaps it's the place where it happened, or the other people who were there, or maybe it's that the film itself made such a huge impact on you as a first-time viewer. I made an effort to think about the movies I can clearly remember seeing for the first time, and here's the list I came up with, as well as what I can recall about the circumstances in which I saw them.

This is the first movie I distinctly remember seeing for the first time, at a drive-in in Jesup, GA, in 1981. Given my long-standing love for SF/F and special effects, it's no shock that I loved it. It also stirred my interest in mythology, which fueled a passion for all things literary. 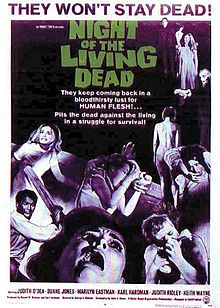 All seen in 1988 at the Governor's Honors Program in Valdosta, GA (see my post about that)

At a fraternity house at Georgia Tech in 1989 - the brothers were drunk, but I was sober, and I got so sucked into watching the movie that I paid no attention to the shenanigans going on around me, much to the disappointment of the guy who hoped I'd be scared by the film and need his manly protection. I think he left when I started laughing at the death scenes. (No, I don't remember now why I thought they were funny!) 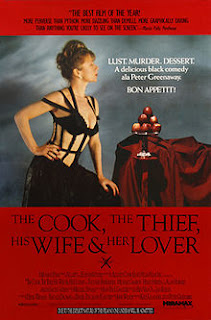 At an NC-17 film series at Emory University in late January 1991, with the man I would eventually marry. Oddly enough, this series formed the basis of most of our first week of dating, an odd start in terms of content but fitting given how many movies we have seen together since. Of the two, The Cook, the Thief, His Wife & Her Lover made by far the greatest impression. I can still close my eyes and see whole scenes of that film, though I have not watched it again in all these years. The ending in particular is impossible to forget. This was my first real exposure to foreign films as such, not to mention NC-17 films. I went back to Emory's little theater for a Star Trek marathon, Prospero's Books (1991), and My Own Private Idaho (1991) during my college years, all memorable in their own ways.

Talk about a weird double feature! I saw both with a large group of friends from Agnes Scott and Emory. We all went to an Atlanta theater for Silence of the Lambs, which left us feeling freaked out by the time it got over. Luckily, we came out of the theater to find a floor show of Rocky Horror recruiting an audience for their midnight screening. It turned out that Frank-N-Furter was a high school friend of some of our folks, and we all got in for free. Silence is the better movie, but Rocky Horror was more fun; it was the first time I saw the live show.

Another group trip with a different crowd of friends - this one involved a pickup truck full of freezing college students at a drive-in theater outside Atlanta. I don't know why we thought it was a good idea to sit in the back of a truck on a freakishly cold night, but nobody lost any toes. I had to watch the movie again a few years later because I was too cold to pay that much attention to it at the time, but I'll never forget the experience itself. 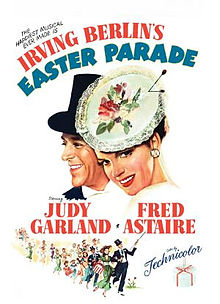 Most of these entries have been movies that were new at the time, but I got to discover this charming musical as part of a senior colloquium on comedy in 1992. The professor who showed it was Pat Pinka, and she was obviously delighted to present it to a room full of English majors. We studied many excellent works during this seminar course, including Swift's "Modest Proposal" and Evelyn Waugh's The Loved One, but Easter Parade stands out as an example of the pure joy of a different kind of comedy.

Most of this list comes from my college years, a formative time, I think, for most young people, but for me especially because the town where I grew up had limited my access to so much of art and popular culture. I was lucky to get away to Atlanta and liberal arts campuses where I could explore literature, film, and my own identity. I went to museums, live theater, the ballet, and pretty much every movie theater in the greater metro area. So many of those movie experiences were memorable because it was all so new to me; even having friends with whom to see those movies was new. Now I see movies in the theater with my family all the time, but I also get to show movies to groups at libraries and lifetime learning programs, and I think the communal experience of watching and talking about a film makes a big difference.

I also talk about seeing some of these films for the first time in this post, so head over to that if you're interested in the portrait of the cinephile as a young girl theme.

What are the movies you remember seeing for the first time? Where were you and who were you with? I'd love to hear about it in the comments section!

Posted by Jennifer Garlen at 4:37 PM