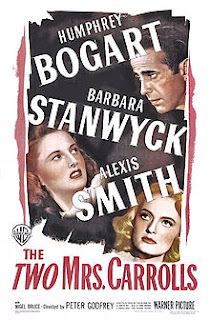 Director Peter Godfrey's modern Gothic offers two iconic stars - Humphrey Bogart and Barbara Stanwyck - as its leads, which is reason enough to see The Two Mrs. Carrolls (1947) in spite of its flaws. Bogart, who played heavies off and on throughout his career, is back on the dark side as a painter who finds artistic inspiration by murdering his wives, while Stanwyck is unusually naive as his current wife and next intended victim. Supporting performers include Nigel Bruce as an atrociously incompetent doctor and Ann Carter as Bogart's beguiling daughter, while Alexis Smith is particularly memorable as a predatory seductress who might be getting more than she expects by tempting Bogart's unhinged artist to leave his wife for her. Bogart, Stanwyck, and Smith all give fine performances, but the film suffers from a lack of suspense that undermines its chilling premise.

Stanwyck plays Sally, who becomes the second wife of painter Geoffrey Carroll (Bogart) after his first wife dies. Sally doesn't suspect that her predecessor's demise was murder, and Geoffrey goes to great lengths to hide his crimes even as he contemplates a second disposal to make way for wife number three. Goaded by the offers of the beautiful Cecily (Alexis Smith), Geoffrey intends to make Sally another victim of his maniacal need for a new muse to drive his work. Geoffrey's young daughter, Bea (Ann Carter), eventually reveals some of his secrets, and Sally realizes the truth about her husband, but her revelation might come too late to save her from his murderous schemes.

The two leads are the chief attraction here, though both are somewhat out of their element. Humphrey Bogart never looks like an artist, but he does make for a credible killer, and it's great fun to watch his Geoffrey come unhinged whenever his secrets are threatened. By the end of the film he has gone right off the rails, justifying his actions with a horrifically sexist assertion that his art is more important than any woman's life. The simmering intensity that Bogart exemplifies works well for dangerous, unstable characters, and his performance here provides a parallel to his more celebrated work in The Petrified Forest (1936), The Treasure of the Sierra Madre (1948), In a Lonely Place (1950), and The Caine Mutiny (1954). Stanwyck, normally a tough cookie and occasionally up for murder herself, here has an ingenue's role, and one of the film's frustrations is that we expect a Stanwyck character to be smarter. Stanwyck plays Sally as loyal, kind, and unsuspecting, which is what the role seems to demand of her, but it's not as good a part as the actress deserves, and Alexis Smith has the meatier role as the scheming Cecily. Stanwyck would get a much better chance to play an imperiled wife in the 1948 film, Sorry, Wrong Number, showing what she could do with a part more suited to her talent.

While the casting issues cause some obvious problems, the chief complaint about The Two Mrs. Carrolls is its inability to generate suspense. The film shows us up front that Geoffrey murders his first wife, creating dramatic irony for the audience as we wait for Sally to catch up. This approach can work well in a narrative, depending on how the unfolding events are handled as the protagonist learns the truth, but Sally stays in the dark so long that we wonder if she's paying attention. When she does finally figure it out there's a flood of information dumped into the last act so rapidly that we don't have time to savor Sally's discoveries. Even the reveal of the gruesome portrait of Sally as an Angel of Death - which ought to be a major moment - seems rushed. We see it briefly and then it's gone as Sally rushes on to the next piece of evidence. Great Gothic thrillers, whether literary or cinematic, use the slow build of rising suspicion and horror to drive the plot and the heroine forward to the inevitable confrontation with the villain. One has only to compare this movie's poisoned milk scenes with the one in Suspicion (1941) to see how differently a really suspenseful film handles the same concept. The 1940s, in fact, saw a host of excellent Gothic thrillers appear in the wake of Rebecca (1940) and the Jane Eyre inspired boom that followed, and it's a shame that The Two Mrs. Carrolls falls short in comparison with its sister films.

In spite of its failures, classic movie buffs will want to see The Two Mrs. Carrolls because it's the only picture to pair Bogart and Stanwyck. It's also worth seeing for fans of Ann Carter, the child star who so memorably plays the young protagonist of The Curse of the Cat People (1944). Peter Godfrey directs Alexis Smith again in The Woman in White (1948), which continues the Gothic trend, as does Cry Wolf (1947), which has Godfrey directing again for Stanwyck. For more of Smith and Bogart in a tale of murderous marriage, try Conflict (1945). Most of the Warner Bros. films are available as DVD on demand from the Warner Archive, including The Two Mrs. Carrolls.

Posted by Jennifer Garlen at 1:19 PM