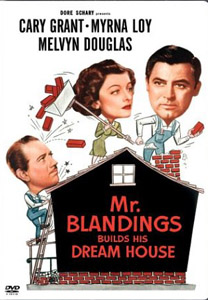 As I watched Mr. Blandings Builds His Dream House (1948) again the other day, several things struck me that I hadn't given much thought to on previous screenings. One was that director H.C. Potter might have sped things up a bit, especially in the first quarter, where the scenes run more like documentary than comedy. Another was that the degree of marital intimacy in the picture is unusual; the protagonists, played by Myrna Loy and Cary Grant, sleep in chaste twin beds but share a bathroom even when one of them is showering. It's obvious from the context that Jim Blandings is getting an eyeful of naked Muriel when he hands her a towel, even if the movie doesn't make a big deal of it. Finally, and most importantly, I was struck by the extent of the Blandings' privilege and extravagance as they build their monstrous dream house in Connecticut. I realized that some of the absurdity that is lost on modern viewers would have been painfully obvious to audiences in 1948, while other aspects that jump out at us would have been more or less invisible to viewers who were accustomed to the race and gender norms of their era. Take both kinds of excess and privilege together, and you begin to see a very different picture overall.

Early in the film, the Blandings live in Manhattan in a very small apartment, with two bedrooms and just one bath. We learn that Jim makes $15,000 a year as an advertising executive, a very good income in those days. The Blandings have two daughters, both enrolled in a progressive private school, and a live-in maid/cook, Gussie (Louise Beavers), whose quarters we never see in either the apartment or the house. Muriel Blandings doesn't work, cook, clean, deal with children all day, or run a large house; mostly she seems to make plans with decorators and move Jim's clothes around so that he can't find them. The Blandings struggle to get themselves out of bed at 7:30 AM, but Gussie is there, dressed and busy and ready with their cups of coffee and their breakfasts. Jim says his office doesn't open until 9, and he never gets there before 10, but he seems very put upon about getting up and getting ready to go.

That setup already gives a modern viewer a lot to unpack. Why can't the Blandings simply move to a better apartment? It would be cheaper and more convenient than moving to Connecticut, but the "dream" of the title involves the American obsession with the ownership of property and houses. The Blandings want to live that dream, even if it bankrupts them and forces Jim to rise before dawn for his commute. They already have some of the most telling parts of that dream, as far as it was expressed in earlier times. Muriel lives a completely domestic life unencumbered by any of the actual work of running a family home; Gussie does all of that for her. The Blandings can afford tuition for two children at an undoubtedly pricey private school. Still, we're meant to see their situation in the apartment as an unbearable plight. We're meant to sympathize with their desire to move out to the country and live in a big house with its own land.

Of course, the Blandings get in over their heads almost immediately. The "historic" house they buy is a wreck that has to be torn down, and then they're really off to the races as they plan an even bigger and more elaborate new home that has to be built. Muriel insists that all of the four bedrooms in the new house have two closets and a private bath; it's never clear if the maid's room has a bath at all, however, since it's only briefly mentioned and then never discussed again. 21st century American homeowners, with their obsession for McMansions of ever-increasing size, might not see the folly of Muriel's demands, but in 1948 it would have sounded crazy. My own house, a modest rancher built in the late 1960s, originally had three bedrooms, each with one closet, and two baths. My grandmother's house, built in the 1950s, also had three bedrooms and two baths for a family of four. That was considered plenty for a comfortable middle class family. The Blandings, however, are not building a middle class home; they are building the 1948 version of a McMansion, and they're getting deep into debt doing it.

All of this is presented as comic mayhem throughout the picture, but the end of Mr. Blandings Builds His Dream House actually attempts to validate the Blandings' privilege and extravagance as admirable. Jim's career is saved, not by his own efforts, but by the clever ham slogan invented by Gussie, whose reward for saving the family's bacon is a $10 raise (still no word on that maid's room bath, or whether it has any closets). Jim and Muriel's friend, Bill (Melvyn Douglas), who has criticized their rash decisions throughout the story, ends up approving their madness and casting a warm glow over the conclusion, where we see the family, still served by Gussie, relaxing on the grounds of their lavish new home. Thus a picture that seems at times like a critique of suburban excess and consumerism ends up an advertisement for them, beckoning city dwellers to cast caution to the winds and invest every dollar in pursuing this particular American dream. Savings be damned! We're off to the suburbs!

I don't mean to ruin our enjoyment of the film by imposing modern standards on it; anybody who watches classic movies knows that they have to be judged with consideration for the era in which they were made. In this picture, however, audiences of 1948 would have seen issues we don't see, while we see other issues that they didn't really want to consider. We catch the subtexts about race and gender and are glad things are different now, but we fell hook, line, and sinker for the big house madness that would have made a lot of original viewers laugh out loud. These elements make Mr. Blandings Builds His Dream House a really interesting film to show in an academic setting, perhaps in an American history course or a seminar on race, gender, and class. New Yorkers, too, especially those in Manhattan, might have their own unique perspective on the film. Is Mr. Blandings building a dream or embracing a nightmare? The movie wants to have it both ways. Luckily for Mr. Blandings, the housing bubble was still half a century from bursting.