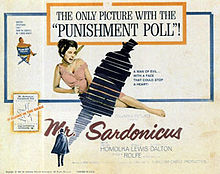 Horror showman William Castle ventures into Gothic territory more familiar to Roger Corman and Hammer Studios with his 1961 feature, Mr. Sardonicus, which saves its trademark Castle gimmick, the Punishment Poll, for the very end of the film. Adapted from the story by Ray Russell, Mr. Sardonicus also includes visual and thematic nods to Dracula (1931), The Man Who Laughs (1928), and the frock-coated period horror that flourished during this era. Castle's version indulges his perverse sense of humor, especially when Castle himself appears on screen to open and close the picture, but there are some real horrors to be found, too, especially in sexual violence that is more suggested than shown.

Ronald Lewis stars as Sir Robert Cargrave, an English doctor who specializes in paralysis cases. He is called to remote Gorslava by his former flame, Maude, now the Baroness Sardonicus (Audrey Dalton), who begs him to cure her cruel husband, the Baron (Guy Rolfe), of an affliction that twists his face into a permanent and horrific grin. The Baron eventually reveals his history to Sir Robert to explain his disfigurement; he was once a simple peasant who robbed his father's grave to retrieve a winning lottery ticket, but the sight of his dead father's face caused his own to become frozen in a matching grimace. He then threatens to mutilate the beautiful Maude if Sir Robert cannot reverse the paralysis. Under duress and running out of time, Sir Robert struggles to save himself and Maude by restoring the Baron to some semblance of his former humanity.

Mr. Sardonicus includes all the usual elements one expects from Gothic horror, especially in the films of the 1950s and 1960s. It has a distant, crumbling castle in a strange Eastern European land, with villagers who live in fear of the aristocratic sadist who lurks there. It has damsels in distress, including scenes of torture tinged with sexual connotations. There's a very straight-laced hero type to foil the ghoulish villain, and, of course, there's a leering, sinister henchman, played in this production by character actor Oskar Homolka. Homolka's Krull, a one-eyed fiend with a thing for leeches, belongs to a caste that includes any number of characters played by Dwight Frye, Boris Karloff, and Bela Lugosi. His menacing presence reinforces the familiarity of the whole setup, from Sir Robert's ominous summons to the castle to the final twist that proves the hazards of having an evil fiend for a right hand man.

The big shock of the picture is the Baron's rictus grin, which we see only a few times because the prosthetics were too painful for Guy Rolfe to wear for very long. He looks truly gruesome - and uncomfortable. Just pay attention to Rolfe's eyes when he appears in the fully realized face. The excruciating disfigurement recalls Conrad Veidt's turn as the more sympathetic Gwynplaine in The Man Who Laughs, although Baron Sardonicus' condition is the result of psychological torment rather than sadistic Gypsy surgery. In a modern context, the Baron's backstory would be the origin of a super villain, which isn't much of a stretch for a man who put out his own henchman's eye and enjoys tying up his wife. Despite his sins, we see him as a dynamic figure and the real protagonist of the narrative, and in the subtext we get the sense that his issues have as much to do with his shrewish first wife as his descent into ghoulish grave robbery. What the Baron fails to understand is that he can't restore his lost humanity, his human goodness, just by restoring his human face. That makes him a tragic monster, as all great cinematic and literary monsters are. It might say something about our own monstrosity that Castle knew how we would vote in the Punishment Poll every time.

For more of William Castle's shockers, try The Tingler (1959), House on Haunted Hill (1959), and 13 Ghosts (1960). You can binge on Gothic castle horror from this era with Roger Corman's House of Usher (1960) and Pit and the Pendulum (1961), as well as Hammer's Horror of Dracula (1958) and Mario Bava's Black Sunday (1960). Look for Ronald Lewis in Scream of Fear (1961), and catch Audrey Dalton in The Monster That Challenged the World (1957). Oskar Homolka earned an Oscar nomination for his performance in I Remember Mama (1948), but if you prefer him being evil go with Alfred Hitchcock's Sabotage (1936). You'll find Guy Rolfe playing the vile Prince John in Ivanhoe (1952); he ended his career as something of a horror staple in Dolls (1987) and a series of Puppet Master films.