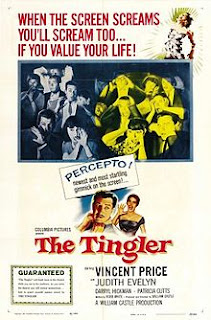 The Tingler (1959) is one of William Castle's most famous horror gimmick pictures, partly because of its star, Vincent Price, and partly because of its wacky use of wired seats and paid plants to elicit screams from the theater audience. Sadly, the modern home viewer can't enjoy the weird thrills of Percepto, but The Tingler is still a lot of fun. In addition to Price, always a pleasure even in his campiest roles, the picture offers Castle himself doing an intro bit, some wonderfully meta moments of the Tingler in a movie theater, and a striking climax that mixes color and black-and-white cinematography to lurid effect. For fans of the fun house sci-fi horror that flourished in the late 1950s, The Tingler is a must-see film, and it's certainly at the top of Castle's strange canon.

Vincent Price plays Dr. Warren Chapin, a pathologist who performs autopsies on executed criminals in search of the force that causes people to scream when they experience fear. During one such autopsy, he meets Ollie (Philip Coolidge), whose brother-in-law is Warren's latest subject. Warren is fascinated to learn that Ollie's wife, Martha (Judith Evelyn), is a deaf-mute who cannot scream even when terrified. He wonders what would happen to her if she were subjected to intense fear, and then she is, in fact, frightened to death. Warren discovers the parasitic Tingler gripping Martha's spine, but it turns out to be a lot harder to control than he expected, and he soon repents of his taboo research into the unknown.

There's actually a lot more going in The Tingler than its central plot suggests, and at times it's hard to tell the good guys from the monsters. Warren has a cheating, evil wife (Patricia Cutts), who would murder him if she could, and perhaps he has the same plans for her. He's obsessed enough to consider experimenting on the defenseless Martha and to take large doses of LSD. At the same time, he seems fond of his assistant and his sister-in-law, the movie's obligatory young lovers. The ambiguity is part of the fun; is Warren going over the edge? Who scares Martha to death? It's not a mystery story, really, but there's enough uncertainty about the central characters to keep us guessing until the end.

The tricky plot sustains the picture when it isn't relying on its gimmicks, but the tricks are Castle's calling cards, and the buzzing seats must have generated plenty of screams in pitch-black theaters back in 1959. The home viewer will have to imagine the scene as the screen goes black and Price's voice calls out to the audience to "Scream! Scream for your lives!" It's corny, yes, but Castle's films are like spook house rides, and that's what makes them so much fun. Home viewers won't have to stretch their imaginations during the scene where Martha is literally scared to death by a series of freakish events. The segment has a terrific silent film quality, something Castle cultivates by having Ollie and Martha run a silent movie theater, but its pièce de résistance is the final moment, when Martha sees bright red blood in a black-and-white bathroom, complete with a bloody hand emerging from a tub of crimson ooze. Poor Martha doesn't stand a chance. The effects of the Tingler itself, hopping across the floor on visible strings, are more typical of the hokey stuff we expect from low-budget shockers of this era, but for many classic sci-fi horror fans it's an endearing flaw, as essential to the genre as the scientist's hubris or the crazy pseudo-scientific dialogue. The Tingler offers plenty of those elements, too.

THE TINGLER is currently streaming on Shudder!

Posted by Jennifer Garlen at 5:02 PM