Modern viewers probably won't watch this William Castle haunted house feature with Illusion-O viewers, the way original audiences did, but 13 Ghosts (1960) is still a treat for classic horror fans. It's quintessential Castle fare, with low-budget thrills, a nutty gimmick, and all the features - or failings - of its genre and era, right down to its painfully stereotypical American family and pseudoscience mixed with the supernatural. Castle fans, however, embrace his pictures warts and all, and they have an enduring charm that makes them perfect picks for long Halloween evenings. 13 Ghosts boasts a baker's dozen of grotesque ghouls, some of whom are delightfully weird, along with performances by child star Charles Herbert, Martin Milner, and Donald Woods, but the icing on the creepy cake is the appearance of Margaret Hamilton as the family's inherited housekeeper. 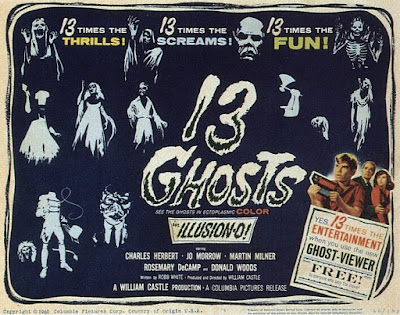 Donald Woods plays Cyrus Zorba, the patriarch of a family with perpetual financial problems. Just as the Zorbas reach the bottom of their bank account, Cyrus inherits a furnished house from his reclusive uncle, who spent his life trying to see and interact with ghosts. Cyrus moves his wife and two children into the house but soon finds that the ghosts are inhospitable housemates. His uncle's attorney, Benjamin Rush (Martin Milner), urges the Zorbas to abandon the home, but young Buck Zorba (Charles Herbert) makes a startling discovery that holds both opportunity and danger for the family.

The movie revels in contrasts between the normal and the bizarre. The Zorbas are an aggressively typical clan, struggling to hold on to middle class aspirations even as the furniture is repossessed. Older sister Medea (Jo Morrow) is pretty and unambitious, despite her provocative name, while mother Hilda (Rosemary De Camp) just wants the ghosts to stop wrecking her kitchen. Cyrus, who works in natural history at the Los Angeles County Museum, is a devoted father and husband, if a little too inattentive to paying the bills. Only Buck possesses an interest in the supernatural, but his fascination with ghosts is passed off as perfectly normal for a young boy and not at all macabre. This is the family thrust into the freakish drama unfolding in the old house, where a headless lion tamer grapples with a ghostly lion, an Italian cook confronts his faithless wife with a cleaver, and old Dr. Zorba himself moans and walks out of his portrait. There's no psychological suspense here, and even with a looming death threat the Zorbas maintain their usual bedtimes and leave their kids alone in their own rooms. The whole situation recalls Eddie Murphy's old joke about white people and haunted houses.

The Zorba family might be dull, but the household ghosts are something else entirely. They can be ridiculous; the Italian ghosts, for example, talk like Cousin Itt, and the lion tamer seems determined to stick his headless neck into his lion's mouth. Others, like the ghosts that menace Cyrus in a secret room, are scarier, while the hanging ghost and the executing arms are more unnerving. We only get snatches of backstory for most of the spooks, just enough to pique our imaginations, although the biggest mystery is the identity of the 13th ghost, since there are only a dozen inhabiting the house when the family arrives. Which of the living characters will join the dead? If you're paying attention you'll see it coming a mile away, but it's all part of the fun. Occupying a space somewhere between the ghosts and the mortals is Margaret Hamilton's medium turned housekeeper, Elaine Zacharides, who warns the family of the peril the house brings. The film relishes a running gag about Elaine being a witch, an unsubtle nod to Hamilton's iconic role in The Wizard of Oz (1939), but Hamilton is game for the gag. The best moment of the whole picture might be its last, when Hamilton breaks the fourth wall to acknowledge the audience and her own stunt casting.

13 GHOSTS is currently streaming on Shudder.
Posted by Jennifer Garlen at 4:39 PM