Cats have been on my mind a lot this month. In March, our family adopted two kittens, Ginger Peach and Earl Greyer, having mourned the deaths of our senior dog, Tess, in January, and our 20 year old cat, Grendel, back in October. Ginger has indeed been a peach, but little Earl quickly succumbed to a fatal disease that could not have been identified until the symptoms appeared (it's called FIP, or feline infectious peritonitis, and it's about the worst possible thing that can happen to a cat). The day Earl died I found myself thinking about that scene in The Strange Love of Martha Ivers (1946), where young Martha's kitten is killed by her vicious aunt (Judith Anderson). Martha then promptly murders her aunt, and the audience doesn't feel sorry for the old hag one bit. If I could push FIP down a flight of stairs I certainly would. Having held a dying kitten in my arms, that scene's emotional trauma now resonates for me in a very personal way.

Life, however, has to move on. Maybe Martha wouldn't have grown up to be such a rotten incarnation of Barbara Stanwyck if she could have just gotten a new kitten. Ginger sits in my lap as I type this post, purring and biting my arm, and next week we expect to welcome another kitten into our home. I'm still thinking about movies and cats, but brainstorming names for the new little guy makes me think more about movies with especially significant cat characters. Here are a few of those movies, in case you also find yourself thinking about naming a new kitty in the near future.

If I were getting a black female cat, I'd be seriously tempted to name her for Simone Simon or her character, Irena, in this iconic Jacques Tourneur horror made under the supervision of genre maestro Val Lewton. Simon plays an immigrant bride who fears that consummating her marriage with her American husband will cause her to transform into a huge, bloodthirsty cat. As it turns out, she's right to be worried. We don't really see much of Irena in panther form, but the movie just oozes feline atmosphere, and it's one of my very favorite Lewton films. Horror is eternally obsessed with cats, especially black ones, but they often skulk around the scenery without ever being named. This movie's existence offers two great names in its star and its protagonist, and really Simone and Irena would be perfect for a pair of kitten sisters. 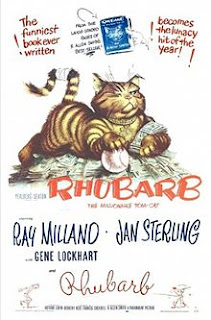 It's not much help in the name department as far as the actual cat is concerned, but Carol Reed's brilliant film noir does have a very important cat character. In one of the movie's many iconic scenes, the presence of the presumably dead Harry Lime (Orson Welles) is revealed when his devoted cat comes up to his hiding place on a shadowy street. Given his disappearing Cheshire grin act, Harry Lime would actually make a great name for a cat, and Orson is pretty good, too, especially if the cat seems likely to get chunky as he ages! Cats on Film has a very interesting post about the cat in The Third Man, with some discussion of the cat's thematic and Freudian significance.

This Ray Milland vehicle is the best place to appreciate cat actor Orangey, who appears in several memorable pictures but here takes the title role. While Orangey is not the most original name for a reddish orange cat, Rhubarb is definitely a good choice. This is a great movie for cat lovers, and it's packed with funny scenes. Unfortunately, Orangey doesn't get a name at all in his other most famous film, Breakfast at Tiffany's (1961), where he's just called Cat. My friend Terry at Shroud of Thoughts has a really excellent post about Orangey and his career, if you want to know more about him. 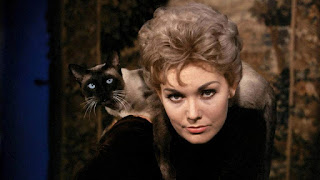 Jimmy Stewart and Kim Novak star in this supernatural romance, made the same year as their most famous pairing in Vertigo. The cat in this instance is Pyewacket, a Siamese who acts as Novak's familiar. The name comes from an account in Matthew Hopkins' 1647 pamphlet, "The Discovery of Witches," which also contains gems like Elemanzer, Greedigut, and Peck in the Crown. If you subscribe to the T.S. Eliot theory of cat naming, Hopkins seems like your go-to source for unique feline monikers, and he's even a movie character himself, played by Vincent Price in the 1968 horror, The Conqueror Worm (aka Witchfinder General). Pyewacket is a good name for a Siamese or any cat who has that supernatural vibe, and it seems like it might work equally well for a boy or a girl. If you want to know more about this particular movie cat, Cinema Cats has a nice discussion of Pyewacket's history and the making of the film. 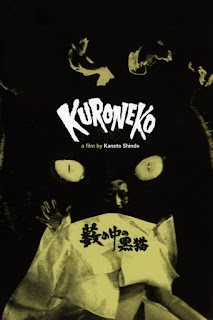 Here's another movie about black cats, this time from Japan. This is a strange, supernatural tale about two women who become murderous cat spirits after they are brutally raped and murdered by a group of samurai. It's also a tragic love story; the protagonist is the son of one victim and the husband of the other, and the women must struggle between their desire to be reunited with him and their sworn quest for vengeance. Obviously, Kuroneko is a name for a black cat only, since it means "black cat" in Japanese! If you need an additional Japanese cat name, you might go with Onibaba, which is also the title of a 1964 film by Kaneto Shindo, the director of Kuroneko. According to Wikipedia, Onibaba means "demon hag," which works pretty well for a cat.

Eventually all discussions of movie-inspired animal names turn to Disney, and The Aristocats is the richest single source for cat names in the studio's history thus far. We have white, fluffy Duchess (voiced by Eva Gabor), tough orange tomcat Thomas O'Malley (Phil Harris), and the kittens: Marie, Toulouse, and Berlioz. There's also a swinging cat band that includes Billy Bass (Thurl Ravenscroft) and Scat Cat (Scatman Crothers). For more Disney cat names, you could go with Thomasina of The Three Lives of Thomasina (1963), Bagheera of The Jungle Book (1967), or Oliver of Oliver & Company (1988). In general, Disney gives more love to dogs than cats, but they do provide some good names that would work for cats, especially in their villains. You could name your cat Maleficent, Ursula, or even Chernabog!

Of course, you could also name a cat after a classic movie star. Tallulah, Veronica, Bette, and Elsa Lanchester would all make great names for female cats; for boys you could go with Valentino, Bela, Boris, Basil, or Errol Flynn. Have any of you out there named a cat for a film character or star? Tell us about it in the comments!

Posted by Jennifer Garlen at 2:15 PM