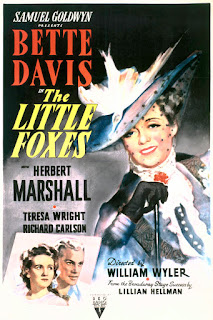 The Little Foxes (1941) reunites stars Bette Davis and Herbert Marshall with director William Wyler after their collaboration the previous year in The Letter (1940), in which Davis had also played a morally bankrupt wife who wrecks Marshall's life. The original stage version of the play by Lillian Hellman had starred Tallulah Bankhead, who hailed from Alabama, where the story takes place around the turn of the last century. The movie version pulled in a whopping nine Oscar nominations, with Teresa Wright and Patricia Collinge actually pitted against each other for Best Supporting Actress, but the lack of any wins is more a testament to the year's embarrassment of cinematic riches than a reflection on the merits of this picture. Smart, sharp, and ruthless in its depiction of a truly awful trio of ambitious siblings, The Little Foxes is a must for Davis and Marshall fans.

Davis leads as the heartless Regina Giddens, who hopes to rake in riches by convincing her husband, Horace (Herbert Marshall), to go in with her two brothers (Charles Dingle and Carl Benton Reid) on a cotton mill scheme. When Horace refuses, his shifty nephew, Leo (Dan Duryea), steals valuable railroad bonds from Horace's safety deposit box to get enough money to proceed with the plan. The brothers also hope to consolidate the family's wealth by marrying Leo to Regina's innocent daughter, Alexandra (Teresa Wright), a plot strenuously resisted by Horace and Alexandra's unhappy aunt, Birdie (Patricia Collinge).

The Hubbard brothers and their sister make most dysfunctional families look like the Brady Bunch. They share a Shakespearean hunger for importance and wealth, and destruction falls on anyone who stands in their way. Eldest brother Ben (Dingle) hides his grasping avarice beneath a veneer of Southern geniality, while second son Oscar (Reid) berates and belittles his alcoholic wife after marrying her for her family's name and property. Shut out from the Hubbard inheritance because of her sex, Regina competes with her brothers by manipulating her ailing husband and pushing relentlessly for the largest share in the cotton mill scheme. Davis, Dingle, and Reid are at their best when they get to be the worst; they really send chills up the spine with their cold eyes and their infinite greed. Davis in particular freezes the heart when Regina watches Horace succumb to a heart attack without lifting a finger to help him. It's murder by sitting still, but the look on Davis' face speaks volumes. Dan Duryea makes a perfect heir to the Hubbards' black nature as the corrupt but spineless Leo; if he lacks the grandeur of his elders, he is, at least, everything that they deserve.

The siblings behave so badly that the movie would be unbearable without the relief provided by the sympathetic characters, particularly Herbert Marshall's dying Horace and Teresa Wright as his devoted daughter. Wright's Alexandra is the dynamic character of the narrative; her elders have already made the decisions that dictate their fates, but she has the opportunity to reject their choices and strike out for a life of her own. She has several key figures to help her, including her father and her playful love interest, David (Richard Carlson), but the good women around her also show her the way. Her Aunt Birdie serves as a tragic object lesson in the dangers of letting the Hubbards control her, and Patricia Collinge plays the character beautifully, so that we see her failings but forgive them because of her sweet nature and her suffering. More importantly, Alexandra has a true mother figure in Addie, played by Jessie Grayson with quiet fortitude and unshakable poise. She might be a paid household servant, but Addie makes the single greatest difference in Alexandra's life, having obviously raised her to be a generous, sincere person in spite of her mother and uncles. The most moving scene in the film unites all of these good characters at a table outside the house, where they form a kind of quiet resistance to the devouring evil of Regina and her brothers. The elders might not be able to save themselves, but they support one another and do their best to protect Alexandra, who is the heir to their humanity just as Leo is the heir to the Hubbards' depravity. Worlds collide when Alexandra eventually stands up to Regina, especially in the movie's powerful final scenes.

Bette Davis already had two Oscars by the time she got her nomination for The Little Foxes. She would end her career with eleven nominations in all, including wins for Dangerous (1935) and Jezebel (1938), both of which were also directed by William Wyler. Wyler won his own Oscars for Mrs. Miniver (1942), The Best Years of Our Lives (1946), and Ben-Hur (1959). For more of Herbert Marshall, see Trouble in Paradise (1932), The Enchanted Cottage (1945), and Angel Face (1952). Don't miss Teresa Wright and Patricia Collinge playing daughter and mother in Shadow of a Doubt (1943); Wright, who also appears in The Best Years of Our Lives, won the Oscar for Best Supporting Actress for Mrs. Miniver. If you want to know how the Hubbards got to be such a rotten crowd, you might track down the prequel, Another Part of the Forest (1948), in which Dan Duryea plays the younger Oscar and Ann Blyth plays Regina. Other films adapted from Lillian Hellman's plays include Watch on the Rhine (1943) and The Children's Hour (1961).

Posted by Jennifer Garlen at 8:32 AM