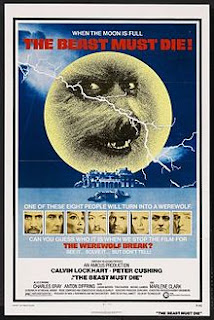 The Beast Must Die (1974) is not a good horror movie, but it's an entertaining one, assuming that its odd collection of elements appeals to a certain kind of classic horror enthusiast. This Amicus production throws together plot threads from The Most Dangerous Game (1932) and Agatha Christie's And Then There Were None (1945) as well as a gimmick straight out of a William Castle picture and performances from a couple of familiar players sure to lure in Hammer fans. Chief among the actors is Peter Cushing, playing a Van Helsing sort of lycanthrope expert, complete with accent, but The Beast Must Die also features Michael Gambon, Charles Gray, and the charismatic blaxploitation star Calvin Lockhart, here inhabiting a role very similar to the kind often played by Christopher Lee.

Lockhart opens the film as eccentric millionaire Tom Newcliffe, who brings an assortment of guests to his compound with the hope of revealing one of them to be a werewolf. Newcliffe intends to unmask and then kill the monster, but his unwilling house guests are understandably upset by his plans. Even his wife, Caroline (Marlene Clark), recoils from his obsession, but Newcliffe presses forward with his schemes, and inevitably his companions begin to die from werewolf attacks. With advice from the werewolf expert, Dr. Lundgren (Peter Cushing), Newcliffe devises tests to reveal the killer among them, but the flaws in his thinking make themselves tragically clear.

The movie is a mixed bag of the usual failings of its type and some surprisingly engaging performances from a capable cast. This is not a high-budget production, as the frequent day-for-night shots repeatedly prove, and there are plot holes big enough to drive a truck through. The clunky "werewolf break" gimmick invites the audience to guess the identity of the monster just before the big reveal near the end, but it's really no mystery to anyone who is paying attention. The werewolf, a large dog with some extra hair thrown on, is scarier for the aftermath of its attacks than the attacks themselves, and we never get a proper transformation scene; the werewolf reveals only a hairy hand before it changes into its fully canine form. None of these problems reflect on the actors' performances, which are generally quite good, and Lockhart's intensity as Newcliffe pushes the silly narrative forward in spite of itself. Gambon, Gray, and Cushing all pretend they're in a much better movie and help to give the picture its Agatha Christie atmosphere, although the weirdest of the lot is certainly Tom Chadbon as the fey, cannibalistic Paul Foote.

While it isn't by any means an essential example of the werewolf genre, The Beast Must Die does play with its conventions in some interesting ways. The werewolf might be a killer, but the real monster throughout the picture is Tom Newcliffe, whose obsession with hunting this supernatural prey surpasses any concern for the lives of others. The movie opens with Newcliffe, a black man, being chased through the forest by armed soldiers, but we then find that he's just testing his own surveillance and trapping systems for the impending werewolf hunt. Thus the picture creates and then thwarts expectations; it wants us to know that we're never on sure footing about what we're seeing or who is behind it. Newcliffe acts like his captive house guests deserve their fate for being potential monsters, but none of them is a terrible enough person to warrant such treatment; the real werewolf hasn't chosen to become a killer, and Newcliffe's persecution puts everyone else in danger of dismemberment, death, or infection from a scratch or bite. There's some poetic justice in the finale, at least as far as Newcliffe is concerned, but a lot of innocent blood gets spilled before he sees the error of his ways.

If you want to see the best of the werewolf genre, stick with Werewolf of London (1935), The Wolf Man (1941), and An American Werewolf in London (1981). Peter Cushing was a busy actor in 1974; his other films from that year include From Beyond the Grave, Madhouse, and Legend of the 7 Golden Vampires. You'll find Calvin Lockhart in Halls of Anger (1970) and Cotton Comes to Harlem (1970), while Charles Gray is probably best remembered for his role as Blofeld in Diamonds Are Forever (1971). Michael Gambon is familiar to Harry Potter fans as the second actor to play Albus Dumbledore; he has enjoyed a long and varied career, but The Beast Must Die is an unusual entry even in his diverse filmography. He is still hard at work in 2016, with three pictures in post-production at the time of this post.

Posted by Jennifer Garlen at 3:02 PM