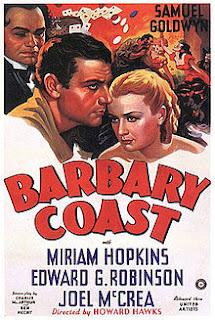 Howard Hawks made far better and more memorable films than the 1935 period drama, Barbary Coast, but the movie is worth watching for a number of reasons, not least of which is Edward G. Robinson with an earring. The title identifies the setting of this rather gritty picture as the wildest section of San Francisco during the California Gold Rush; within this powder keg location we find Robinson ensconced as one of his most flamboyant heavies, playing opposite a grimly determined Miriam Hopkins and a naive Joel McCrea. If you're a particular fan of any of those stars you'll find enough in Barbary Coast to keep you entertained, but the film also boasts several bonuses in its supporting players, including Walter Brennan, Brian Donlevy, Frank Craven, and Donald Meek. Basically a Western with a melodramatic slant, Barbary Coast isn't perfect, but it is an interesting depiction of a woman's struggle to survive in a world of violence, gold, and lawless, dangerous men.

Hopkins stars as Mary Rutledge, who arrives in San Francisco to find her impending marriage ruined by the murder of the man she meant to wed. Undeterred, Mary quickly gets herself into the good graces of the local crime boss and gambling hall owner, Louis Chamalis (Robinson). As Swan she serves as the attractive bait that lures gold-loaded miners to try their luck at Louis' rigged roulette wheel, but Louis becomes violently jealous when he suspects that she has met a man whom she likes better than him. The newcomer is handsome Jim Carmichael (Joel McCrea), a poetic miner ready to head back East if he can get out of San Francisco without losing his gold, his heart, and his life.

With its Western trappings and melodramatic perspective, the movie has to juggle the masculine elements of its world with the heroine's emotional narrative, a task made more complicated by the enforcement of the Hays Code. Anyone paying the slightest bit of attention understands that Mary is Louis' mistress, but the scenes tend to be coy enough that a stubbornly prudish person - say, Joseph Breen - could pretend that Mary's moral crisis is only about working a crooked wheel. Mary is the only female character with any screen time of note; it's clear that she's fighting to get by in an aggressively male society, and she does that by embracing stereotypes of hyper femininity like beauty, charm, and heartlessness. The dirty men of the city, agog at the arrival of a "white woman," carry her over the filthy streets to keep her dress from getting muddy; they treat her as if she were made of fine china, and she encourages it, especially because it subjects them to her control. Her chance encounter with Jim Carmichael catches her off guard and reminds her of the person she was before San Francisco, but that endangers both of them because it becomes harder for Mary to return to her life as Swan. She overcompensates at first, then relents, while around her the fierce male world erupts into violence and vigilante retribution. The ending lays bare some of the problems with the uneasy coupling of the two genres and their gendered worlds; it doesn't work, partly because it forces murderous Louis to shift abruptly from Western blackguard to melodramatic love martyr.

Hopkins gives a very solid performance as the morally conflicted Mary; she has a perfect look for the role but is also able to convey her character's calculated coldness and desire for gold. The men dwarf her physically, but she dominates the screen; only Robinson really wrests attention away from her, and he has help from his oddly piratical costume. Robinson doesn't really break any new ground with the Louis character, but he's always such a compelling villain that it doesn't matter. McCrea comes into the movie like a lamb to the slaughter; he seems too big and strong to be credible as a guy who only survives because of lucky chances, but at least it's easy to see why Hopkins' character likes him. The supporting players bring the Western atmosphere to life, with Walter Brennan in fine form as the mischievous coot, Old Atrocity, lovable in spite of his many flaws, and Frank Craven tragic and compelling as the crusading journalist who wants to tell the city the truth about its crooked ways. Brian Donlevy, always useful as a tough guy, doesn't talk much as Louis' muscle, Knuckles, but he does make his ominous presence felt. Donald Meek gets a few good scenes as Sawbuck, one of many miners to fall prey to Swan's spinning wheel, and Harry Carey leads the town's vigilantes with dogged purpose. With all of these actors in the mix, Western aficionados will have plenty to appreciate, even if the melodramatic elements of the picture don't appeal.

Be aware that Barbary Coast lives up to its setting's reputation for racial antagonism, especially of the Chinese. The picture earned an Oscar nomination for Best Cinematography, but Howard Hawks went on to more enduring hits with Bringing Up Baby (1938), The Big Sleep (1946), and Rio Bravo (1959). See Miriam Hopkins in Dr. Jekyll and Mr. Hyde (1931), Trouble in Paradise (1932), and The Old Maid (1939). Edward G. Robinson is best remembered today for noir films like Double Indemnity (1944) and Key Largo (1948), but he's delightful in the less familiar comedy, Brother Orchid (1940), in which he pokes fun at his earlier roles in gangster films. I find Joel McCrea irresistible in Sullivan's Travels (1941) and The More the Merrier (1943), but for contrast in his Western work try Ride the High Country (1962). If you thrill to tales of the Barbary Coast, check out Frisco Kid (1935), San Francisco (1936), or Flame of Barbary Coast (1945).
Posted by Jennifer Garlen at 5:11 PM