Classic Films in Focus: THE MORE THE MERRIER (1943) 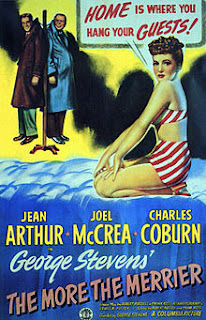 Directed by George Stevens, The More the Merrier tackles serious wartime issues with a lively sense of humor, something contemporary audiences must have appreciated a great deal as they struggled with housing shortages, romantic complications, and the many other mundane problems of folks supporting the war effort from home. The Academy obviously approved of the picture, too; it picked up six Oscar nominations, including nods for Best Picture and Best Director, although it was supporting actor Charles Coburn who actually took home a gold statue for his work on the film. Modern audiences will find that the screwy humor of The More the Merrier appeals just as much today, thanks to the combined talents of Stevens, Coburn, Jean Arthur, and Joel McCrea, with the last two demonstrating marvelous comedic chemistry as reluctant roommates who strive to suppress the spark of desire.

Arthur plays Washington, D.C., resident Connie Milligan, who decides to help with the housing shortage by renting out part of her apartment. Despite her stated preference for a female tenant, she ends up with the elderly and devious Benjamin Dingle (Charles Coburn), who promptly decides to play matchmaker by renting half of his half to the first good-looking young fellow who turns up. When Connie finds out that Joe Carter (Joel McCrea) is also living in her apartment, she tries to evict both men, but Dingle never stops working to bring the couple together, even though Connie is engaged to an older bureaucrat named Charles Pendergast (Richard Gaines).

The story plays out as a screwball comedy, with lots of sight gags and physical humor that depend on the congested spaces of wartime Washington. In Connie's apartment, three adult strangers inhabit uncomfortably close quarters, especially when the bathroom is involved, but everywhere we see the humorous misery of people having to live, work, and play like sardines in a can. There's also a fair bit of gender reversal humor, since able-bodied young men are a rarity in the middle of the war, and the crowds of working women seem to enjoy being the predators instead of the prey. When Connie and Joe find themselves together at a club, Connie gets plenty of competition for Joe's attention; in fact, the other women are so wolfish that they make big, strong Joel McCrea look like a terrified lamb. There's a cartoonish quality to a lot of the jokes, especially the gag at the end, which only works because of our view of the apartment through its windows, but they're still quite funny. The comedy also flirts with the constraints of the Hays Code; it's not as daring as The Miracle of Morgan's Creek (1944), but it gleefully invites us to consider the scandalous possibilities inherent in its setup.

The performances of the three principal actors strike a wonderful balance between silliness and sympathy, making us root for their characters even as we laugh at them. Jean Arthur is very much in her element in this kind of role; she's feisty and feminine at the same time, capable of being ravishingly beautiful but also willing to appear onscreen in a housecoat and gobs of gooey face cream. Her character relishes schedules and order but isn't particularly eager to marry her boring boyfriend, played by Richard Gaines in a truly awful toupee. The two men who upend her life bring much-needed chaos and change, even if takes Connie a long to time to admit her attraction to Joe. McCrea plays Joe as both cynical and boyish; he talks a fast game but barks like a seal in the shower and plays train with Dingle as they chug around the apartment. Fans of the handsome actor will also appreciate how much of the movie he spends shirtless, which offers a nice balance to the frequent display of Arthur's shapely form. Bringing the romantic leads together is Charles Coburn's mischievous Dingle, whose motto for everything is "Damn the torpedoes, full speed ahead!" Although there's definitely something a little unnerving about the way he forces himself into Connie's company, Dingle means well, and his elaborate schemes toward the end of the picture demonstrate how far he's willing to go to bring Connie and Joe together. Coburn, always a reliable character actor and a brilliant comedian, is at his best in this role, which displays his charm, humor, and ability to enhance the effect of a funny leading lady.

Although The More the Merrier brought Jean Arthur her only Oscar nomination, she made many memorable films, including Capra classics like Mr. Deeds Goes to Town (1936), You Can't Take It with You (1938), and Mr. Smith Goes to Washington (1939). For more comedy with Joel McCrea, see Preston Sturges' Sullivan's Travels (1941) and The Palm Beach Story (1942). Sturges also directed Charles Coburn in The Lady Eve (1941), which provided the actor with one of his most notable roles. George Stevens won Best Director Oscars for more serious fare in A Place in the Sun (1951) and Giant (1956), but for more of his romantic comedies try Swing Time (1936), Woman of the Year (1942), and The Talk of the Town (1942), which also stars Jean Arthur.
Posted by Jennifer Garlen at 1:20 PM