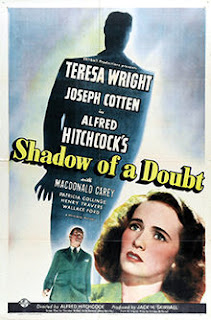 Alfred Hitchcock called Shadow of a Doubt (1943) his favorite of his own pictures, and there's certainly a lot to appreciate in this smart, dark thriller about a young woman who suspects that her beloved uncle might not be what he seems. Teresa Wright and Joseph Cotten give riveting performances as the two central characters, both called Charlie, who rightly claim that their relationship goes far beyond the typically avuncular. While much of the really daring subject matter remains in the subtext, Shadow of a Doubt stirs up quite a psychological hornet's nest with its conflicted young heroine and her charming but deadly relative, and for fans of character actors the film also delivers plum performances from Henry Travers and Hume Cronyn.

Wright plays the younger Charlie, who pines for something to shake up her family's boring routine in Santa Rosa, California. Her prayers seem to be answered when her Uncle Charlie (Joseph Cotten) arrives for a rare visit, bearing gifts and smiles for everyone, but especially for Charlie and her mother, Emma (Patricia Collinge). Soon, however, young Charlie learns that her uncle is being pursued by two men who suspect him of committing terrible crimes, and Charlie herself begins to think that Uncle Charlie might actually be the Merry Widow Murderer for whom the police have been searching.

Young Charlie makes for an unusual Hitchcock protagonist if we think of the kinds of characters who take center stage in his most popular thrillers, where James Stewart and Cary Grant play very grown-up men embroiled in mystery and violence. Teresa Wright's heroine is, by contrast, not only female and innocent but also childlike in her initial view of the world and its inhabitants; in a modern remake Charlie might well be played by a fifteen year old, and the chaste romance with Detective Jack Graham (Macdonald Carey) could be dispensed with altogether. Despite her youth and girlish attitudes, Charlie proves to be a resourceful, strong-willed heroine, who has to confront her uncle on her own and then survive the consequences of knowing too much. Only Charlie manages to uncover the truth that eludes the police, and only Charlie can defend herself against her uncle's lethal intentions.When the climactic moment comes, nobody can save young Charlie but herself, and, in the end, she has to carry a burden of knowledge and sorrow that she rightly judges to be too much for her loving family.

In addition to its intriguing young heroine, the movie offers a mesmerizing study in duality. Two suspects elude the police, one in the west and one in the east. Two detectives pursue Uncle Charlie from place to place. Two train trips frame the action; one brings Uncle Charlie to town, and another carries him away. Most importantly, two Charlies stand at the center of the story, linked by blood but separated by it, too. Uncle Charlie is himself another example of duality, with one charming persona for company and a hidden, deadly side that he keeps secret at all costs. The extensive doubling also turns up with young Charlie's father (Henry Travers) and his friend, Herbie (Hume Cronyn), a strange pair of would-be murderers who constantly imagine ways to kill each other. Their macabre fantasies contrast with the real murder attempts taking place in the family's own home, but they never suspect a thing. Only Emma, Charlie's devoted older sister, ponders the significance of the two strange "accidents" that befall young Charlie and almost take her life. A subtler pairing occurs between Uncle Charlie and Detective Graham; both of them want young Charlie's loyalty and love, and it's only after the romance between the two young people flowers that Uncle Charlie turns violent. Does he view Graham as a romantic rival as well as a threat to his freedom? There's an incestuous undercurrent in the relationship between the two Charlies, hinted at and suggested in the ring that he gives her and the fact that he's sleeping in her bed. Think about it hard enough and Shadow of a Doubt more than lives up to its ominous name.

Gordon McDonell's original story for Shadow of a Doubt earned the movie its only Oscar nomination, but Teresa Wright had already won the Academy Award for Best Supporting Actress the previous year, for her performance in Mrs. Miniver (1942). The young actress also picked up nominations for The Little Foxes (1941) and The Pride of the Yankees (1942). Joseph Cotten is probably best remembered today for his performance in Orson Welles' Citizen Kane (1941), but he also stars in Gaslight (1944), Portrait of Jennie (1948), and The Third Man (1949). Shadow of a Doubt marks the screen debut of Hume Cronyn; see more of him in Lifeboat (1944), The Postman Always Rings Twice (1946), and Brute Force (1947). For more Hitchcock heroines, try Sabotage (1936), The Lady Vanishes (1938), and Rebecca (1940).