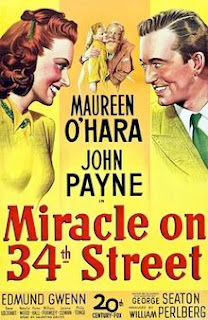 Although it has been remade several times, the original 1947 release of Miracle on 34th Street is still the best and most charming incarnation of this heart-warming tale of holiday faith. Its attractions include an Oscar-winning Santa Claus performance courtesy of Edmund Gwenn and a memorable early appearance from a very young Natalie Wood, as well as lovely Maureen O’Hara and the very likable John Payne as the romantic leads. With its three Oscar wins and its enduring appeal, Miracle on 34th Street thoroughly deserves its status as a holiday classic, one of those movies that it just wouldn’t be Christmas without.

The story opens at the Macy’s Thanksgiving Day Parade, where Macy’s employee Doris Walker (Maureen O’Hara) recruits a singular Santa (Edmund Gwenn) as a last-minute replacement. Soon the kindly Kris Kringle is working at the store, where he delights customers and their children but alarms Doris by insisting that he really is Santa Claus. When Kris’ sanity is called into question, Doris’ handsome neighbor (John Payne) comes to his defense in court.

The love story between O’Hara and Payne works perfectly well, but the movie is really more interested in Kris Kringle and little Susan (Natalie Wood), Doris’ skeptical daughter. Their scenes together burst with sentimental feeling and gentle good humor as they pretend to be monkeys, blow bubble gum, and gradually build a relationship despite Susan’s doubts. For many people, Gwenn’s Kris is the quintessential Santa Claus, generous and droll with just a hint of mischief in his twinkling eyes. The story leaves it up to the viewer to decide if Kris really is the jolly old elf, but, as the Magic 8 Ball would say, “Signs point to yes.”

Behind the holiday cheer lie some serious themes, including Doris’ loss of faith following the end of her marriage to Susan’s father. Susan clearly yearns for a paternal figure, as her friendship with the neighborly Fred makes clear, but she’s also incomplete because her mother has discouraged her from believing in anything or even using her imagination. Fred and Kris must work together to heal this broken little family, an accomplishment perfectly symbolized by the film’s closing scene. Like most of the very best Christmas movies, this one balances its sweetness with melancholy and the bitterness of experience, and the spirit of Christmas is as much about acknowledging those feelings as it is about merriment and goodwill.