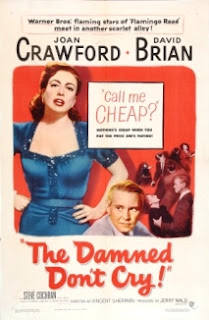 Like Mildred Pierce (1945), The Damned Don't Cry (1950) stars Joan Crawford in a story that merges the themes of melodrama and film noir. Crawford is perfectly at home in both genres, and the combination of the two had revitalized her career with Mildred Pierce, for which she won her only Best Actress Oscar. Not surprisingly, then, The Damned Don't Cry offers Crawford a juicy role for which her talents are ideally suited. Despite the title, there's actually a fair bit of crying, especially on the part of Crawford's character, an unhappy housewife who trades ethics and poverty for a chance at getting more out of the rigged game of life. Solid direction from Vincent Sherman and a particularly good performance by Kent Smith help Crawford shine, while the story offers an opportunity to consider the femme fatale as a dynamic character who doesn't necessarily set out to ruin the men whose lives she inevitably destroys.

Crawford plays working-class housewife Ethel Whitehead, who walks out on her family after a devastating tragedy, determined to have something more for herself. She finds work but quickly realizes that she can get ahead by using her sexuality as an asset, especially in the shady world of gambling dens and nightclubs. She seduces a mild but intelligent accountant, Martin Blankford (Kent Smith), and talks him into a job with a criminal organization, but by the time Martin proposes Ethel has already hooked a bigger fish, the kingpin George Castleman (David Brian). Castleman remakes Ethel into widowed oil heiress Lorna Hansen Forbes and provides her with a life of luxury, but it comes at a galling cost. The crime boss orders Lorna to head for Palm Springs and seduce a rebellious underling, Nick (Steve Cochran), so that George can find out how far Nick's treachery goes.

The Damned Don't Cry alternates between its two genres but achieves a balance that keeps the story interesting and constantly moving. The opening presents us with Nick's murder and Lorna's disappearance; it then moves backward to tell us how these characters reached that tragic climax. The violence of the first scene assures us that this story will be a gritty gangster tale as well as a women's melodrama, in spite of the long stretch that then unfolds Ethel's sad history and her first steps into a life of crime. Once George Castleman arrives on the scene, the story kicks up the noir heat; Ethel succumbs to greed and selfishness even as her actions doom the essentially decent Martin to life without his self-esteem or the woman for whom he gave it up. Everywhere she goes, Ethel brings misery to the men around her, even when she doesn't intend to do so. She abandons her husband, delivers clients to a shady casino, destroys Martin's respectability, betrays Nick, and even ends up being the ruin of Castleman. Crawford never plays Ethel as consciously evil; she can be hard, she can be determined, and she can be terribly selfish, but she has enough humanity to draw back from being involved in the murder of a man who has fallen in love with her. Unfortunately for her and everyone else, she changes course too late, but that's noir in a nutshell.

Two supporting performances stand out among the rest of the cast and help Crawford develop the complexities of her own character. Kent Smith, an actor who never quite became a star, has the best of the male roles as Martin. In a more conventional noir film Martin might be the protagonist, the good guy who falls into the abyss thanks to an ambitious woman. When we first meet him he's a real straight arrow, but over the course of the story he becomes jaded and hard; eventually he's the one pushing Ethel instead of the other way around. Martin never stops loving Ethel, as the final scenes make clear, but the life they might have had together is gone for good. Selena Royle has the other significant supporting role as Ethel's mentor and confidante, Patricia Longworth. The relationship between Ethel and Patricia is unusual; rarely do women in noir films trust each other and work together, but Patricia helps Ethel assume the worldly polish and glamour that being Lorna requires without ever seeming jealous of her or more loyal to Castleman than she is to Ethel. Ethel and Patricia collaborate so well that they can communicate volumes to each other with mere glances; they work like a pair of dancers or predators as they maneuver Nick into Ethel's arms. Royle plays her part with a subtle, quiet genius; she never upstages Crawford, but she makes her presence integral to the success of the picture. David Brian and Steve Cochran are both solid as the gangsters, one refined and the other reckless, but their characters are fairly straightforward. Cochran does, however, help us get past our initial dismissal of Nick to see why Ethel balks at betraying him, and Brian turns up the brutality for a shocking confrontation near the picture's end.

After The Damned Don't Cry, Joan Crawford and Vincent Sherman also made Harriet Craig (1950) and Goodbye, My Fancy (1951). You can compare the leading lady's work on this film with other memorable performances in A Woman's Face (1941), Torch Song (1953) and Johnny Guitar (1954), all of which feature tough, complex heroines. Kent Smith is best remembered today as the clueless husband in Cat People (1942), but he also appears in The Curse of the Cat People (1944) and The Spiral Staircase (1945). Look for Selena Royle in supporting roles in The Harvey Girls (1946), A Date with Judy (1948), and The Heiress (1949). David Brian stars with Crawford in Flamingo Road (1949) and This Woman is Dangerous (1952), but his greatest critical success came with Intruder in the Dust (1949), which earned Brian a Golden Globe nomination. See Steve Cochran as a series of unsavory characters in The Best Years of Our Lives (1946), White Heat (1949), and Storm Warning (1951).

Posted by Jennifer Garlen at 7:56 PM