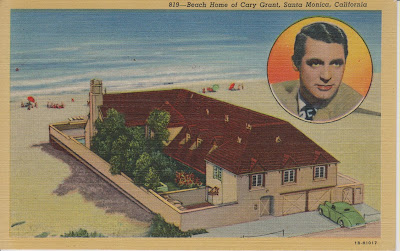 Here's Cary Grant's beach home in Santa Monica, California. The postcard was manufactured by Western Publishing & Novelty Co. of Los Angeles. The house was originally built for Norma Talmadge in 1929, but Grant lived there from 1939 to 1942 with housemate Randolph Scott. According to Wikimapia, lots of stars spent some time in this house, including Merle Oberon and David Niven. You can read all about the neighborhood and its classic stars in this article from Curbed Los Angeles. 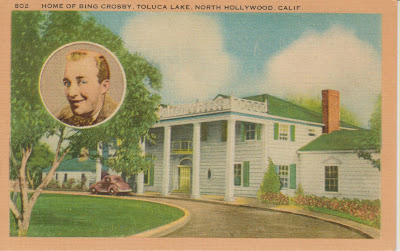 This postcard shows Bing Crosby's Toluca Lake home in North Hollywood. Longshaw Card Co. of Los Angeles produced the card. The original house on the site burned in 1943, and the home seen above was built to replace it. Later owners included Andy Griffith and Jerry Van Dyke. According to the LA Times, the home sold in 2009 for $10 million. 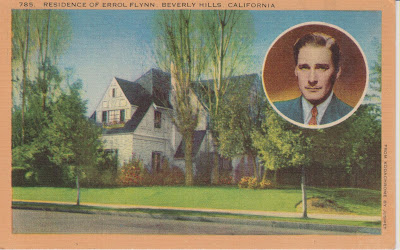 Another postcard from Longshaw shows the Beverly Hills home of Hollywood bad boy, Errol Flynn. Like the three other cards, this one includes a picture of the star resident. It's hard to imagine Flynn getting up to his usual mischief in such a stately manor! The Errol Flynn Blog has a great list of places associated with the actor; as you might expect, he got around. 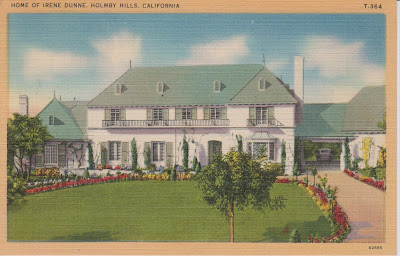 This last card is the only one that lacks a photo of the star, which is a shame, since it's also the only one depicting the home of an actress. This is Irene Dunne's Holmby Hills residence; Tichnor Art Company produced the postcard. Dunne lived in the home for more than 40 years, but it was demolished after her death and replaced (such a pity!). The Irene Dune Site has a nice collection of photos showing Dunne in the home in March 1950.

I found these while sorting through some of my late mother-in-law's belongings. They lay in a heap of vintage postcards that she probably inherited from her mother or grandmother, given that many were addressed to her grandmother and were from her uncle; I don't know if she actually knew that these were among the lot. You can imagine my delight at finding them! Scans of the postcards are already available online thanks to copies for sale on Amazon and Ebay, but I thought many of my classic movie friends might not know about them and would enjoy seeing them. I think I'm going to get them framed and put them up in my study.
Posted by Jennifer Garlen at 5:19 PM