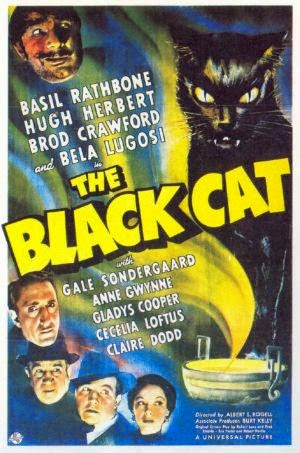 Like many of the old dark house pictures of its era, The Black Cat (1941) relies upon an offbeat mixture of comedy and horror, zipping from gasps to giggles like a cheerily macabre carnival ride. For some horror purists, the goofier elements of these films repel, but it's easy to imagine a throng of matinee youngsters reveling in the quick turns and reversals that The Black Cat provides. You never know if a secret door will open to horrors or hilarity, and therein lies the appeal of the whole genre. Though it's not to be confused with the earlier and generally better regarded 1934 film of the same name, the 1941 outing does offer a delightful cast of character actors, including Basil Rathbone, Bela Lugosi, Gale Sondergaard, Broderick Crawford, and a young Alan Ladd.

Broderick Crawford stumbles through the proceedings as Gil, an eager opportunist looking to arrange the sale of the Winslow estate and earn the affection of lovely Elaine (Anne Gwynne), one of the prospective heirs. After Gil turns up with loopy furniture dealer Mr. Penny (Hugh Herbert), the residents of the house experience a series of shocks, starting with the suspicious death of estate owner Henrietta Winslow (Cecilia Loftus). As the heirs squabble over Henrietta's will, more strange events unfold, with secret passages and an ominous black cat helping a killer eliminate anyone who gets in the way.

The plot strongly resembles those of The Cat and the Canary (1927) and The Old Dark House (1932), although it has very little to do with the Edgar Allan Poe story from which it and the 1934 picture draw their titles. Its chills rely mostly on a mysterious killer who sneaks through the house using a maze of secret passages, but Gale Sondergaard is by far the scariest of the regular residents as the creepy housekeeper, Abigail. The camera angles highlight the weird angles of her face and her leering eyes to great effect, and she certainly knows how to milk the role for every bit of the audience's attention. Cecilia Loftus also benefits from creative camera work when she first appears onscreen; her eyes freakishly exaggerated by the thick spectacles she wears, she looks more like a creature from another world than a frail old lady with a harmless love for cats. Sadly, the film's most famous actors don't enjoy as much opportunity to demonstrate their talents. Basil Rathbone's Montague Hartley is a cad, but not an especially frightening one, and he doesn't really have enough to do, while Bela Lugosi's hairy groundskeeper is mostly deployed to rattle Gil and create confusion. Alan Ladd plays the sort of role one expects Elisha Cook, Jr. to fill, a minor part but fraught with anxiety and accusation. One year later he would appear in This Gun for Hire (1942) and become a true cinema star.

The comedy elements are hit or miss, with Broderick Crawford generally likable as Gil but Hugh Herbert laying it on much too thick with his trademark schtick. If you like his antics you'll love him here, but his character thwarts the action right up to the last moment, and he's too dense to understand the climactic life-or-death situation. Gil, however, manages to straddle the two genres, even though his efforts to unmask the killer repeatedly land him in ludicrous mishaps. It's an unusual role for Broderick Crawford, who would go on to win an Oscar for Best Actor in All the King's Men (1949). Here he gets to be comedian, amateur detective, and romantic lead all at once, sneezing helplessly at the omnipresent cats but persisting in uncovering the truth even when everyone else derides his claims. Crawford's Gil functions as the reliable, all-American everyman at the center of the unpredictable action; even if the assembled cast is awash in red herrings - which it certainly is - we know we can depend on Gil to be the good guy all the way through, and if he sometimes gets goofy that only serves to make him more familiar and reassuring. Lee Tracy serves a similar if more streetwise function in Doctor X (1932), and Bob Hope covers the same territory in The Cat and the Canary (1939) and The Ghost Breakers (1940).