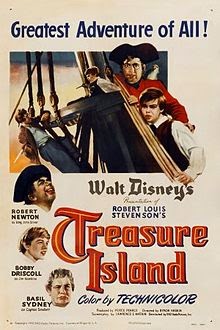 Long before Pirates of the Caribbean, Disney set sail for Treasure Island (1950), a production that charted new territory for the studio as its first live action feature. Adapted from Robert Louis Stevenson's influential tale of buccaneers and  buried gold, the Disney version edits its source material to focus primarily on the relationship between Jim Hawkins and Long John Silver, a standard approach for film treatments before and since. What it loses in fidelity to the original, the Disney Treasure Island makes up for with Robert Newton's iconic turn as the infamous one-legged pirate, at once comical and menacing, and easily the most memorable aspect of the film, although Byron Haskin provides brisk direction of the action through a colorful backdrop of coastal towns and exotic island settings.

Bobby Driscoll stars as Jim Hawkins, a young boy thrust into adventure when a dying pirate named Billy Bones (Finlay Currie) hands him a map to buried treasure. Soon, Jim embarks as cabin boy on a voyage to discover the loot, with Squire Trelawney (Walter Fitzgerald) and Dr. Livesey (Denis O'Dea) as his companions and protectors. Jim also develops a friendship with the ship's cook, Long John Silver (Robert Newton), not suspecting that Silver is really a ruthless pirate who has his own plans for taking over the ship and claiming the buried treasure for himself.

The adaptation is not without its problems. Bobby Driscoll, best remembered as the voice of Peter Pan, is an obvious choice for Jim from the studio's perspective, since the child star had already appeared in numerous Disney pictures, but he is much too flatly American for the role, and he has an unfortunate habit of squinting, open-mouthed, at adult characters when they speak. Ben Gunn, played by Geoffrey Wilkinson, is also a weak point with his shrill, over-the-top wild man act, but his part is so truncated that he has few opportunities to offend. The other supporting players generally fare better, especially Denis O'Dea and Walter Fitzgerald, but they also get little screen time to develop their characters, and Finlay Currie is sadly underused as Billy Bones. Not a single female character appears in the picture at all, making this movie quite the boys only affair, although Stevenson's novel provides a good supporting part in Jim's hard-working, determined mother.

On the plus side, the scenery is exciting and authentic looking, even though the movie was shot in England rather than the West Indies, and the action rolls along without any slow spots. Moreover, Robert Newton takes control of every scene in which he appears, making the most of the picture's best role. In film adaptations of Treasure Island, Jim Hawkins is only the nominal protagonist, and Long John Silver is always the star. Newton effectively conveys Silver's mix of geniality and calculation; we never can tell which side he really wants to be on, and when we think we know him he surprises us again. Newton's delivery of his lines informs our idea of what a pirate is supposed to sound like, while his appearance, with his one leg, his talking parrot, and his swarthy, dark looks, has become the model of the stereotypical buccaneer. Newton became so identified with the role that he reprised it for Long John Silver (1954) and the television series, The Adventures of Long John Silver (1956-1957), but neither proved as successful as the original outing, and Newton died in 1956.

For more film adaptations of Treasure Island, try the 1934 version with Wallace Beery and Jackie Cooper or Muppet Treasure Island (1996), with Tim Curry as Long John. See Robert Newton in The Beachcomber (1938), This Happy Breed (1944), and Oliver Twist (1948). Bobby Driscoll also stars in Song of the South (1946), So Dear to My Heart (1948), and The Window (1949). Get a better appreciation for Finlay Currie in Great Expectations (1946) and People Will Talk (1951). For something really different from director Byron Haskin, try Robinson Crusoe on Mars (1964).
Posted by Jennifer Garlen at 12:20 PM