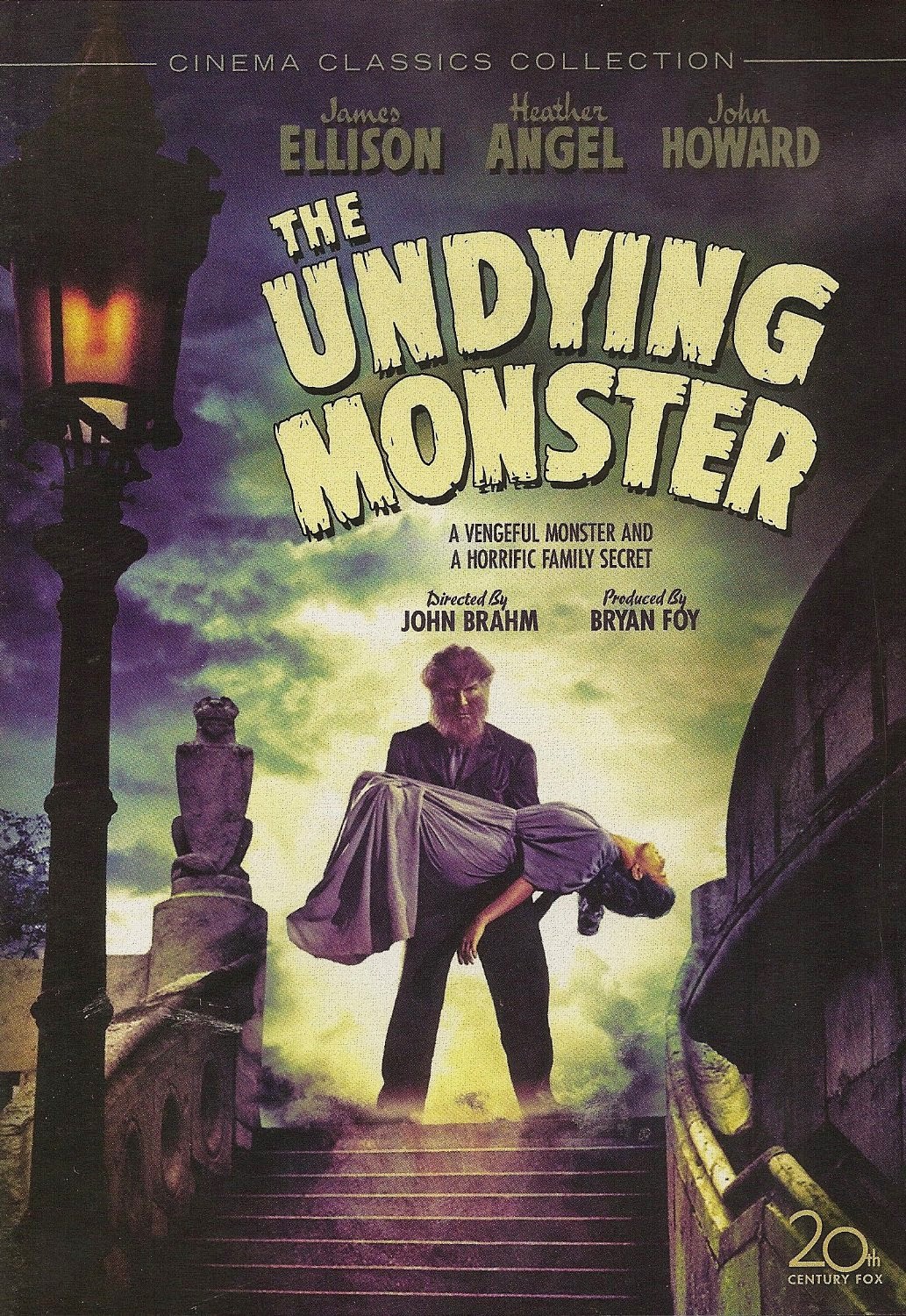 At first glance, The Undying Monster (1942) looks like yet another routine programmer of its era, one of many low-budget B horrors churned out by various studios in the wake of the Universal monsters’ success. It clocks in at just over an hour, with a cast that most viewers are unlikely to know and a limited collection of sets for them to play against. This Fox chiller gets a boost, however, from the creative direction of John Brahm and the bravura cinematography of Lucien Ballard, a combination that also produced the gothic delirium of The Lodger (1944). With Brahm and Ballard extracting every bit of atmosphere possible from their limited resources, The Undying Monster rises above its humble roots to approach the status of cinematic art. It’s not a perfect film, by any means, but it does warrant some attention from serious students of the horror genre and fans of Val Lewton, who performed similar magic on a shoestring budget.

The story unfolds at the end of the nineteenth century, when Helga Hammond (Heather Angel) discovers her brother, Oliver (John Howard), mauled on a coastal lane near their ancestral home. Oliver’s fellow victims are his devoted spaniel and a local nurse, but nobody knows what exactly attacked them. Scotland Yard sends detective Bob Curtis (James Ellison) and his assistant, Miss Christopher (Heather Thatcher), to investigate, but they find secretive servants and family friends repeatedly blocking their search for clues. Dr. Colbert (Bramwell Fletcher) seems particularly determined to thwart Bob’s investigation, even after the nurse dies of her injuries. Only when Helga is threatened by the mysterious assailant does the terrible truth finally emerge.

Although its title doesn’t suggest it, The Undying Monster is actually a werewolf story, loosely adapted from a 1922 novel by Jessie Douglas Kerruish. The film adaptation also borrows liberally from narrative elements of The Wolf Man (1941), which Universal had released a year before. We even have a foreboding verse: “When stars are bright/ On a frosty night,/ Beware thy bane/ On the rocky lane.” The butler, Walton (Halliwell Hobbes), is especially fond of quoting it. Other conventional genre tropes include the creepy housekeeper, the fearful maid, house pets who suddenly sense the uncanny, and, of course, the monster’s climactic abduction of the story’s female lead.

The performances lie somewhere between the routine and the remarkable. Heather Angel starts the picture as a fine example of a brave, determined heroine, but she recedes from view once the Scotland Yard duo arrive, and by the last scene she has vacated the screen entirely. John Howard’s Oliver is handsome and amiable but never really aware of what’s going on around - and within - him. While James Ellison and Bramwell Fletcher square off as the story’s chief combatants, their romantic jealousy over Helga Hammond is never really articulated, and their disagreement is mainly about how to best protect the Hammond siblings from whatever it is that threatens them. Heather Thatcher has the most unusual role as Christy, the wisecracking spinster assistant; she is partly comic relief and partly progressive, pre-feminist professional woman, but whenever she appears on screen she makes herself impossible to ignore.

The cinematography really lifts the whole picture to a different level. Ballard and Brahm employ some striking camera angles, beginning with a truly tense point of view shot of the nurse being attacked by the monster. The Hammond Hall set is also artfully rendered, with the camera lingering on its ancient rooms and furnishings as the clock strikes twelve. In one of the most visually arresting scenes, Helga and Dr. Colbert sit before a fire and discuss the situation, but we see them from behind the smoke and flames, as if we were hiding in the fireplace to eavesdrop on their conversation. Sadly, the final shot of the monster’s demise is not as skillfully handled; the film aims higher than it can reach by trying to have the monster’s face transform while he’s hanging from a cliff.

John Brahm is best remembered today as a director for television series like Alfred Hitchcock Presents, Thriller, and The Twilight Zone, but his other cinema work includes Hangover Square (1945) and Hot Rods to Hell (1967). Lucien Ballard provided cinematography for The House on Telegraph Hill (1951), Prince Valiant (1954), and The Wild Bunch (1969). Look for Heather Angel in Pride and Prejudice (1940) and Lifeboat (1944), and see more of John Howard in The Philadelphia Story (1940) and The Invisible Woman (1940). James Ellison also stars in Charley’s Aunt (1941), I Walked with a Zombie (1943), and The Gang’s All Here (1943).
Posted by Jennifer Garlen at 3:20 PM