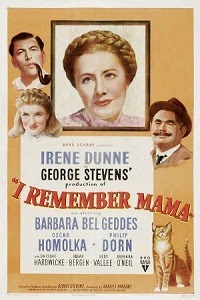 Nominated for five Academy Awards, I Remember Mama (1948) is one of those movies that requires a handful of hankies to watch, especially for those who have fond memories of their own mothers. George Stevens’ nostalgic melodrama has all the right ingredients for a classic tearjerker, including a sweet, sincere performance from Irene Dunne as the idealized matriarch, whose dedication to her family knows no bounds. Barbara Bel Geddes also makes a lasting impression in her second screen role as the narrator of the tale, but the cast is full of talented character actors who each bring something special to the picture and enhance its appeal. While it might prove too sentimental for some modern viewers, those who enjoy heartwarming family stories will find much to love in I Remember Mama, which wisely balances laughter and tears in its depiction of the Hanson family’s experiences.

Barbara Bel Geddes stars as Katrin, the daughter of Norwegian immigrants living in San Francisco in the first decade of the twentieth century. Along with her brother and two sisters, Katrin grows up under the devoted protection of her father, Lars (Philip Dorn), and mother, Marta (Irene Dunne), who make many sacrifices for the benefit of their children. As Katrin enters adulthood and becomes a writer, she recounts the many ups and downs of the family’s life together, but she focuses most on the selfless love and support of her mother.

Both Dunne and Bel Geddes earned Oscar nominations for their performances, but the picture really belongs to Dunne, who manages to make Mama an angel without making her dull. Equally adept at comedy and sentiment, Dunne gives Mama enough good humor and strength to see her through almost any crisis, even little Dagmar’s emergency surgery. Some mothers might sit at home and cry, but Mama disguises herself as a cleaning lady in order to sneak into the ward and keep her promise to her daughter. Scenes that might otherwise play as maudlin, like the euthanization of an injured pet cat, are lightened by Dunne’s handling of the moment. The audience believes in Mama because of Dunne’s performance of her; the role would bring Dunne the last of five Best Actress nominations, and it’s a shame she never won. Bel Geddes, fresh-faced and girlish, looks far younger than her actual age as the adolescent Katrin; her youthful appearance and soft voice lend credibility to her role as a teenager still trying to find her place in the world. Katrin spends much of her time on the sidelines, watching and taking note of her mother’s actions, but Bel Geddes shines in the few key scenes where she takes center stage.

The two lead actresses get ample support from the rest of the cast, which features some memorable players who bring both depth and humor to their roles. Oskar Homolka is quite the scene-stealer as Uncle Chris, the overbearing patriarch whose loud personality masks his loving, generous spirit. Ellen Corby plays timid Aunt Trina with such a yearning for happiness that she alone of Marta’s three sisters commands our sympathy. Both Homolka and Corby picked up Oscar nominations for their performances, pitting Corby and Bel Geddes against each other for Best Supporting Actress (they lost to Claire Trevor in Key Largo). Trina’s mild-mannered suitor is played by Edgar Bergen, appearing without his wooden sidekick, Charlie McCarthy; as Mr. Thorkelson, he functions mostly as a comical figure but has a tender scene with Trina near the very end of the picture. Dedicated classic movie fans will also appreciate the contributions of Rudy Vallee, Florence Bates, Cedric Hardwicke, and Barbara O’Neil in brief but effective appearances.

The original story of I Remember Mama came from Mama’s Bank Account, a novel by Kathryn Forbes, which was adapted into a stage play by John Van Druten. A television series and Broadway musical followed, proving the story’s enduring appeal to audiences. For more of Irene Dunne, see The Awful Truth (1937), Love Affair (1939), and My Favorite Wife (1940). Barbara Bel Geddes is best remembered today as Ellie Ewing on the television series, Dallas, but you’ll also find her in Blood on the Moon (1948), Panic in the Streets (1950), and Vertigo (1958). See Oskar Homolka in Sabotage (1936), The Invisible Woman (1940), and Ball of Fire (1941). Like Barbara Bel Geddes, Ellen Corby had her most memorable role on television, as Grandma Walton on The Waltons, and she also has a small part in Vertigo; look for more of her in Caged (1950), Angels in the Outfield (1951), and Shane (1953).
Posted by Jennifer Garlen at 3:46 PM