A Day with the Duke on August 1

Turner Classic Movies kicks off its 2012 Summer Under the Stars program with an all-day celebration of John Wayne on August 1, which will thrill some classic movies fans and irritate others. John Wayne has always been a polarizing figure – people either love him or hate him. Younger women, in particular, often tell me of their disdain for Wayne and for Westerns in general. Now, I happen to love the Duke, which might be an odd thing for a feminist literary scholar to admit, but there’s a lot to be said in John Wayne’s defense, and these highlights from the TCM lineup provide some compelling evidence of the star’s true value. 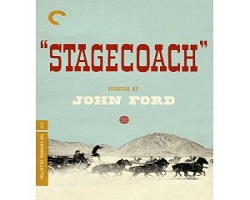 Take STAGECOACH (1939), for instance. As the Ringo Kid, Wayne is a younger, gentler outlaw figure, courting Claire Trevor’s fallen angel with deference and tact. Viewers who are only accustomed to the old, craggy Duke of the late 1960s and early 70s might be surprised at the smooth, handsome features of the youthful star. Wayne was already 32 when STAGECOACH was released, and he had been in Hollywood for more than a decade, but the film represents a major turning point in the actor’s career as the first film he would make with director John Ford. 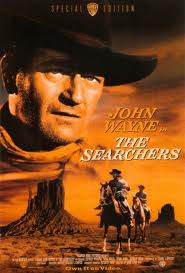 THE SEARCHERS (1956) is the film many consider the best of Ford’s pictures with Wayne; it has even been called the greatest example of the entire Western genre. Wayne takes a much darker role as Ethan Edwards, a man obsessed with finding his niece (Natalie Wood) after Comanche raiders kill her family and kidnap her. If you don’t think John Wayne could act, try watching this picture and thinking about how much of the story is left in the subtext, with only the characters’ expressions to suggest what is really going on.

In opposition to the heavy drama of THE SEARCHERS are films like RIO BRAVO (1959) and MCLINTOCK! (1963), where the Duke shows his lighter side. Whether he’s being flustered by Angie Dickinson or rattled by Maureen O’Hara, Wayne has a wonderful knack for playing the manly man utterly confused by the womanly woman. You don’t think that John Wayne can be funny? Try the scene in RIO BRAVO in which he plants a big kiss on Walter Brennan’s cantankerous old Stumpy. 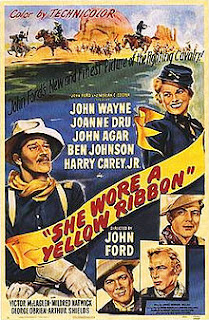 Finally, SHE WORE A YELLOW RIBBON (1949) shows Wayne playing a character much older than himself, a sentimental widower who still visits his wife’s grave and questions his place in the world on the eve of his retirement from the Army. Despite his name, Nathan Brittles is really quite a softie, taking a very paternal interest in Joanne Dru’s heroine and her romantic conflicts.

What all of these films have in common is a Wayne character deeply involved with the women in his world, which is fascinating given that Wayne is so often held up as the ultimate macho star. We think of Wayne with a rifle in his arms, but just as often it’s a woman he holds. The rifle determines the outcomes of other men’s lives, but the woman dictates the destiny of the man himself. This dynamic makes Wayne’s Westerns endlessly interesting to me, and the films being shown on TCM offer a great chance to catch the Duke in action with a variety of leading ladies and in several different modes. It’s also a perfect opportunity for viewers who don’t think they like John Wayne to give the star another chance. 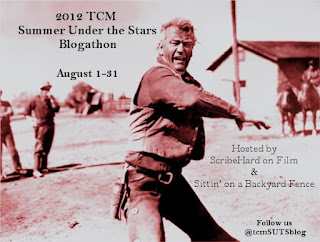 This post is part of the TCM Summer Under the Stars Blogathon hosted by ScribeHard On Film and Sittin On a Backyard Fence. The TCM celebration of John Wayne begins at 6 a.m. Eastern on August 1, 2012, with FLYING LEATHERNECKS (1951).

The Virtual Virago also writes about classic movies as the National Classic Movies Examiner. For full-length reviews of other John Wayne films, try FORT APACHE (1948), THE QUIET MAN (1952), and THE SHOOTIST (1976).
Posted by Jennifer Garlen at 11:52 AM