Classic Films in Focus: THE FLESH AND THE FIENDS (1960) 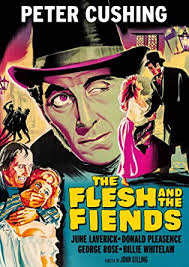 The notorious Edinburgh murderers Burke and Hare supplied the insatiable cadaver market with "made to order" corpses in the early 19th century, and they've been nightmare fuel for popular culture ever since, with multiple horror films revisiting their crimes. Among these is The Flesh and the Fiends (1960), which benefits from the presence of Peter Cushing as the cadaver purchaser, Dr. Knox, and Donald Pleasence as the relentlessly amoral William Hare. Although the title is ultimately more lurid than the actual film, the continental cut of The Flesh and the Fiends justifies its X rating with plenty of topless female flesh and a couple of extended murder scenes that emphasize the victims' plight. It's not as glossy as some of the better Hammer horrors where Cushing became a genre icon, but this Triad version of a Hammer picture is worth watching if you're interested in historical horror or enjoy the particular appeal of a really devilish Donald Pleasence villain.

Cushing plays the real life receiver of the corpses, Dr. Knox, who doesn't much care how he gets the cadavers that supply his medical students with "subjects" for study. Knox's constant demand for fresh bodies keeps the local grave robbers busy, but Burke (George Rose) and Hare (Pleasence) stumble into the trade when one of Burke's lodgers dies still owing the rent, and Hare realizes that there's an easy way to turn the loss into a gain. Soon the pair are dispatching lodgers and locals at a brisk pace and lining their pockets with Knox's guineas, even as Knox's assistant, Dr. Mitchell (Dermot Walsh) begins to suspect the cadavers' origins. Meanwhile, Knox's troubled student, Chris (John Cairney), discovers a different part of Edinburgh's underbelly when he begins a romance with prostitute Mary (Billie Whitelaw), but the lovers prove to be too close to the murderers' orbit for their own good.

The performances of the main characters drive the interest here, with Rose and Pleasence like a comedy duo from hell as the opportunistic killers. They're almost cartoonish in their exaggerated appearance and mannerisms, but once they start knocking off their neighbors they become really unnerving. The attacks on Mary and Daft Jamie (both real victims of the historical killers) drive home the violence of the acts but also highlight the differences between the two murderers, with Hare feverishly unhinged and Burke brutally cruel. Both men are monsters without any humanity in them, but they're fascinating monsters nonetheless. Cushing provides some contrast to the pair as the erudite but ethically questionable doctor, with the actor as reliable as ever in his role. Still, the film pulls its punches with Knox, trying to invest him with some redeeming qualities through the devotion of his niece (June Laverick), his assistant, and his many students. Neither the situation presented in the picture nor the historical record justify Knox's escape from punishment for his part in the crimes, and the scenes of Knox's domestic life do nothing to advance the plot. Of the secondary characters, Mary is the most interesting and tragic, even though every viewer starts the picture knowing that a hard-drinking prostitute has very little life expectancy in this kind of story.

The Flesh and the Fiends would be a better picture without the niece's romantic subplot and with more emphasis on the other characters who aid or fall victim to the killers' schemes, and its artificial studio atmosphere doesn't do the sublime creepiness of period Edinburgh justice. The nudity of the continental cut was provocative for 1960 but pretty tame even by the standards of the 1970s and thus not a real concern for a modern audience. The horror of the murders and the sad fate awaiting the victims are the compelling elements of the story, although the rough justice meted out to the killers provides some satisfaction while also highlighting the extreme privilege that protects men like Knox. In short, this isn't the best Burke and Hare picture of the lot, and it's certainly not the best of Cushing's horror roles, but there's enough here to warrant a viewing for fans of the genre and its primary players. Pleasence alone is worth the time and effort required.

John Gilling, who wrote and directed The Flesh and the Fiends, also made The Gamma People (1956), Fury at Smuggler's Bay (1962), and The Mummy's Shroud (1967). If you're interested in more horror inspired by Burke and Hare, try The Body Snatcher (1945), Horror Maniacs (1948), Burke & Hare (1972), or Burke and Hare (2010). A visit to modern Edinburgh reveals the enduring appeal of the gruesome history of Burke and Hare, where you can find their crimes recreated at The Edinburgh Dungeon or see the actual skeleton of William Burke on display at the Anatomical Museum. You can also find walking tours devoted to tracing the steps of the murderers and their victims.

As of February 2021, The Flesh and the Fiends is available for streaming on the horror subscription service, Shudder.

Posted by Jennifer Garlen at 3:08 PM