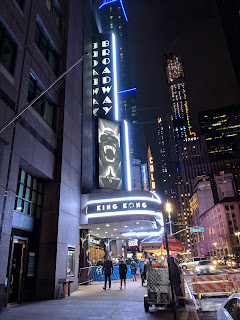 Some 85 years after the great ape's original screen debut, King Kong has made a triumphant return to New York City, this time as the star of his own Broadway musical. There have been plenty of sequels, reboots, revisions, and reincarnations featuring the oversized cinema gorilla, but I've never seen anything quite like this version of the familiar tale. It's an amazing marriage of puppetry and performance that brings Kong to life in a completely new way while also issuing some loving correctives to the thornier aspects of the original film.

The result is truly breathtaking, even if the songs aren't quite as memorable as one might like. I didn't come out of King Kong humming any particular tune, but I did come out with a stunned sense of awe and a weepy teenager overcome by the emotional rapport the audience develops with the incredibly sympathetic Kong. The eponymous ape moves, grunts, and breathes like a living thing, but his soulful and expressive eyes are his most impressive feature. Once you see him, you believe in him, even though the talented puppeteers working his enormous body are always in view.

The new stage production keeps the setting and some of the primary characters from the 1933 film, namely the ape himself, heroine Ann Darrow, and ambitious filmmaker Carl Denham. It eliminates the heroic love interest so that the focus stays squarely on Ann and Kong, and this Ann doesn't need a big, strong man to come and rescue her anyway. She's a brave, kind, adventurous protagonist whose version of the famous Fay Wray scream is a war cry of empowerment rather than a distress signal. The musical also eliminates the racist elements of the movie - there are no human natives on this Skull Island - and goes one better by making Ann herself black. These changes sharpen the focus of the story and breathe new life into it, making this a Kong adventure that resonates with a broad modern audience. 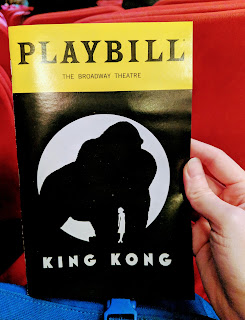 The human performances also make this new incarnation worth catching while the original cast is still attached. Christiani Pitts is a firebrand Ann, feisty and capable, and she gives powerful voice to songs like "Queen of New York" and "The Wonder." Eric William Morris understands the slippery line required for the selfish but seductive Carl; we have to like him enough to see why Ann goes with him in the first place, but Carl is the closest the musical comes to a villain, since he's incapable of understanding the perspectives of Ann or Kong, much less appreciating that they might have equal claims to happiness and self-determination. Lumpy, played by Erik Lochtefeld, offers an antidote to Carl with his sadly sweet affection for Ann, though I couldn't tell if it was the character or the actor or both who strongly brought James Cromwell to mind during his scenes.

As a feminist with a lifelong love of classic movies, puppetry, and musicals, I'm probably the perfect audience for a show like King Kong, but even if you're only casually interested in one or two of those categories this is a production worth seeing. It offers a fresh and thoughtful take on a story most of us think we already know, and it shows how that story can continue to change and appeal to new audiences. 85 years later, King Kong is alive and well on Broadway, and I hope that this show will enjoy all of the success that it truly deserves. It's absolutely stunning, and my entire family loved it.