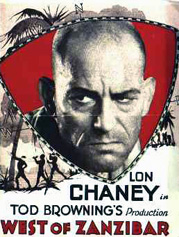 Tod Browning's silent 1928 story of revenge in the African Congo provides a challenge to modern viewers, given that it relies on hyper-racist stereotypes and deeply rooted misogyny for much of its horror, but if you're looking for something truly horrifying then West of Zanzibar (1928) certainly fits the bill. It packs an astounding amount of perverse cruelty into 65 minutes of film, most of it perpetuated by Lon Chaney as a paralyzed villain on a vendetta against his romantic rival and the child who symbolizes his betrayal. Lionel Barrymore and Warner Baxter also have prominent roles, although Mary Nolan takes most of the abuse as the young woman persecuted by Chaney's monstrous vengeance. Chaney is, as always, mesmerizing in a dark and complicated role, but be warned that this film is no stroll in the park.

Chaney plays the magician Phroso, who loses the use of his legs in a fight with Crane (Barrymore), the man who is stealing his wife. Later the wife turns up again with a baby in tow and promptly dies. Over his wife's corpse, Phroso swears vengeance on Crane and his child, thus embarking on an eighteen year mission to ruin Crane, debauch his daughter, and murder them both by invoking the ritual sacrifice performed by a tribe of African cannibals. Phroso makes himself a voodoo master in the remote African camp by using his magician's tricks, but his relentless desire for revenge blinds him to a painful truth until it is almost too late to change.

Chaney's performance is the highlight here. He begins as a sympathetic victim, a good man buffeted by unkind fate. His world crumbles when his beloved wife abandons him and her suitor cripples him, but these events alone do not change him. He only chooses evil over good in the church where he finds his wife's body, with the helpless infant crying nearby. The scene swells with terrible irony; Phroso looks on the Virgin and Child, and instead of pity for his wife's daughter chooses hate. From then on he embraces cruelty, sending the girl to be raised in a Zanzibar brothel while he cheats Crane of his ivory haul. Chaney plays Phroso as tragic, then monstrous, with slight hints of the vestiges of his humanity peeking through from time to time just to remind us of what he once was. His dead legs provide a physical parallel to his withered soul, and Chaney is, of course, brilliant in the way he manages to convey both the bodily and the spiritual wreckage.

Everyone else mainly reacts to Chaney, and the emotions called for are horror, disgust, fear, and loathing. In his own way, Lionel Barrymore's Crane is just as much a monster as Phroso, wreaking havoc and creating misery without ever worrying about the consequences of his actions. He laughs at Phroso's folly because he feels no pity for its victims. Mary Nolan, as Maizie, is chief among these; her tragic eyes and body language suggest so much more about her suffering than the title cards can convey. Warner Baxter plays a good man mired in Hell as Doc, but Maizie's arrival stirs his numbed conscience, and the pair eventually gather the courage to defy Phroso. These two characters get more nuanced development in the 1932 version of the story, Kongo, which fleshes out the doctor's narrative and their budding romance. The superstitious natives also react to Phroso, but they're so hideously stereotyped that they remove the viewer from the moment, and it's hard to blame the actors playing them for being unenthusiastic about selling their roles.

If nothing else, West of Zanzibar proves (yet again) that silent horror is by no means tame; Browning pushes buttons and tests limits in ways that no horror director of the 40s or 50s could. It suffers from the usual limitations of its era, especially where racist, colonialist attitudes are concerned, and it exploits the sexual degradation of its main female character in deeply uncomfortable ways. It might be preferable to start with other Chaney films if you aren't already well versed in his work or silent movies in general; try The Phantom of the Opera (1925), The Unholy Three (1925), or The Unknown (1927). For some of Browning's more controversial work, see Freaks (1932), or try his very weird collaboration with star Lionel Barrymore in The Devil-Doll (1932), in which Barrymore plays the man obsessed with revenge. Browning and Barrymore also team up for The Show (1927). For a different look at Warner Baxter, try The Prisoner of Shark Island (1936).

Posted by Jennifer Garlen at 4:35 PM