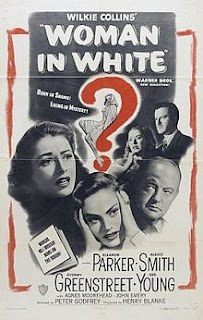 The 1948 adaptation of Wilkie Collins' The Woman in White features some notable character performances and plenty of Gothic mystery, but it isn't an ideal picture or a very faithful treatment of its source material. Its appeal depends mainly on its sinister figures, particularly the always memorable Sydney Greenstreet as Count Fosco, but its leads are less interesting, and they get the majority of the screen time. Classic film fans will find the movie worth watching for Greenstreet, Agnes Moorehead, and John Abbott, but devotees of the original novel will find the changes problematic, especially where the romantic plot is concerned.

Gig Young plays the painter Walter Hartright, who gets drawn into intrigue when he becomes a drawing master to pretty heiress Laura Fairlie (Eleanor Parker) at Limmeridge House. Walter falls for Laura but is warned of her engagement to Sir Percival Glyde (John Emery) by Laura's cousin, Marian (Alexis Smith). When Walter accuses Sir Percival and Count Fosco (Sydney Greenstreet) of a diabolical plot involving a mad girl who strongly resembles Laura, Marian tells him to leave, but both Laura and Marian soon discover that Walter's suspicions were correct. Reunited some months later, Walter and Marian realize that Laura's double has died and been buried as Laura herself; together, they set out to rescue Laura from an asylum and restore her true identity.

The most appealing of the novel's sympathetic characters is Marian Halcombe, and the film recognizes this fact even as it rewrites much of her role. Alexis Smith gives a fine performance as the intelligent, capable Marian, who serves as a foil to the delicate and rather insipid Laura. Eleanor Parker is actually more interesting as mad Ann, Laura's double, than she is as Laura herself, and sadly that's a fault that the film keeps from the original text, in which Laura is a demure Victorian angel made damsel in distress. Both actresses give better performances than poor Gig Young, whose Walter seems very stiff for a lover who can't decide which girl he likes. Walter's role in the novel as de facto detective doesn't really carry over into the movie, and this leaves Young with little to do but strike poses and lock eyes with both of his leading ladies.

The action depends much more on the heavies, especially Greenstreet's Count Fosco as the prime mover of the plot. Greenstreet has just the combination of charm and menace, as well as the impressive girth, that make Fosco so fascinating as a literary villain, and if you like Greenstreet in other films you'll enjoy his performance here. John Emery's Sir Percival is just a thug in comparison, always eager to jump into murder, while John Abbott is delightfully awful and ineffectual as Laura's hypochondriac Uncle Frederick. Only Agnes Moorehead enjoys any ambiguity about her character's intentions; her Countess Fosco is an odd, repressed figure who has her own reasons for hating Fosco and pitying the plight of poor Ann. Fans of the actress will be sorry that she doesn't have more scenes, but she gets quite a moment in the film's climax as compensation.

The problems with The Woman in White might lie more with Stephen Morehouse Avery's screenplay than Peter Godfrey's direction or any actor's performance, but flaws it definitely has, although some of them are only apparent to those familiar with Collins' source material. Godfrey's best film, Christmas in Connecticut (1945), also stars Greenstreet, but most people remember the rotund actor most for his appearances in The Maltese Falcon (1941) and Casablanca (1942). You can see Alexis Smith play nasty in Godfrey's 1947 picture, The Two Mrs. Carrolls. Eleanor Parker went on to earn three Best Actress nominations for her roles in Caged (1950), Detective Story (1951), and Interrupted Melody (1955). Gig Young gets more to do in The Three Musketeers (1948), Torch Song (1953), and Desk Set (1957), and he won a Best Supporting Actor Oscar for They Shoot Horses, Don't They? (1969).


Posted by Jennifer Garlen at 3:42 PM