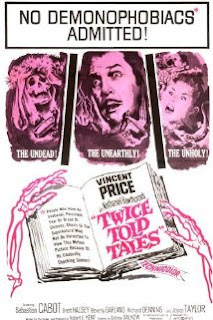 Borrowing both the star and the literary atmosphere of Roger Corman's Poe adaptations, Twice-Told Tales (1963) offers a trilogy of stories from Nathaniel Hawthorne, with Vincent Price taking the lead in all three segments of the film. Like the Corman pictures, this anthology of horror drips with Gothic period atmosphere and relies heavily on Price's irresistible appeal, but for Price devotees the actor's presence more than justifies the movie's existence. Given the genteel 19th-century quality of the tales, there aren't really any shocks on offer, but the Hawthorne stories do present abundant examples of irony and even a little of the supernatural. The third piece, "The House of the Seven Gables," is the most truly Gothic of the three, but both "Dr. Heidegger's Experiment" and "Rappaccini's Daughter" have their charms.

In "Dr. Heidegger's Experiment," Price stars as Alex, an old friend of  Carl Heidegger (Sebastian Cabot), whose lifetime of mourning his lost love takes a strange turn when the pair discover water with the power to restore youth and life. Price then plays the sinister father in "Rappaccini's Daughter," using his botanical science to transform his child (Joyce Taylor) into a poisonous vessel of death. "The House of the Seven Gables" features Price as prodigal son Gerald Pyncheon, who brings his wife (Beverly Garland) back to his family's haunted estate to search for the wealth in a hidden vault.

Hawthorne's favorite themes are very much on display throughout the trilogy; he has a finer, less macabre sense of horror than Poe, and his works often hinge on moral considerations. Each of the anthology segments makes significant changes to Hawthorne's original texts, but they still retain the spirit in which the stories were conceived. The first two are basically weird tales wrapped in the crushed crimson velvet of American Romanticism; they are almost, but not quite, science fiction, but both concern themselves more with questions of irony and ethics than scientific speculation. Price, of course, is a master at registering a character's dawning sense of the tragically ironic, although he's far less campy in all three segments than in many of his most iconic horror roles. Each of his characters fails Hawthorne's moral tests and richly deserves his fate, but Price also invests the first two with sincerity and regret; the third, Gerald Pyncheon, is a fully realized Gothic heavy, a scheming wastrel who defies a vengeful ghost in spite of the danger to himself and his innocent wife. Price's performance in that part harks back to his role as Nicholas Van Ryn in Dragonwyck (1946), although Price had actually played a very different Pyncheon character in the 1940 feature length adaptation of The House of the Seven Gables.

Price's costars in each segment benefit from his screen presence, with the women in particular standing out in their performances. Mari Blanchard is lovely if less than innocent as Sylvia, Dr. Heidegger's long lost bride, while Joyce Taylor conveys the anguish of Beatrice Rappaccini, a Rapunzel trapped in her garden by her father's poisonous love. Beverly Garland and Jacqueline deWit provide foils for one another, as well as obstacles to Price's Gerald Pyncheon, as Gerald's wife, Alice, and formidable sister, Hannah. Garland appears as the heroine and deWit as a variation on the sinister Gothic housekeeper, the person who knows the family's darkest secrets. The other men are generally less memorable, although Sebastian Cabot gives a very fine performance as the heartbroken Heidegger. Brett Halsey and Richard Denning, both playing straight romantic leads, are mostly there to pine after the ladies and get in Price's way, but their characters suffer from the usual flatness of their type.

For a double bill of Vincent Price horror anthologies, pair Twice-Told Tales with Corman's Tales of Terror (1962). The actor had a busy year in 1963, which also saw the release of The Raven, The Haunted Palace, and The Comedy of Terrors. Sebastian Cabot is best remembered today for the TV series, A Family Affair, and for his voice acting roles in Disney films, including The Sword in the Stone (1963), The Jungle Book (1967), and The Many Adventures of Winnie the Pooh (1977). Be sure to catch Beverly Garland in The Alligator People (1959), and see Richard Denning in Creature from the Black Lagoon (1954). Sidney Salkow, who directed Twice-Told Tales, mostly worked on television episodes and Westerns, but his career stretched all the way back to the 1930s. He also directed Bulldog Drummond at Bay (1947), Sitting Bull (1954), and four episodes of The Addams Family.
Posted by Jennifer Garlen at 8:51 AM