Classic Films in Focus: REVENGE OF THE CREATURE (1955) 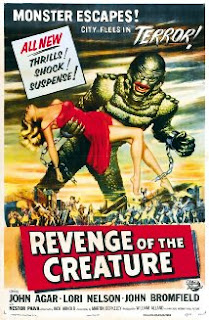 The Gill Man returns for a second shot at interspecies romance in Revenge of the Creature (1955), a direct sequel to the 1954 Universal horror, Creature from the Black Lagoon. Jack Arnold also comes back to the fish man out of water story as the director, but this time the action moves from the Amazon to coastal Florida, where the Gill Man becomes a captive tourist attraction and the unwilling subject of scientific experiments. Although it lacks the novelty and eerie atmosphere of the original picture, Revenge of the Creature is nonetheless an entertaining follow-up, especially for fans of 1950s sci-fi horror. Genre regular John Agar is on hand as the scientist hero, with Lori Nelson as the lovely lady icthyologist who attracts the Gill Man's unrequited affection.

Agar stars as animal psychologist Clete Ferguson, who travels to Florida to run tests on the Gill Man after a hunting party captures the creature in his Amazon lagoon. Graduate student Helen (Lori Nelson) becomes the professor's assistant as well as his love interest, despite some competition from Joe (John Bromfield), the macho hunter who trapped the Gill Man and brought him to the United States. Chained in a tank at a marine park, the Gill Man endures shock training and captivity until his inevitable escape. He then terrorizes Jacksonville as he attempts to make off with Helen, while Clete leads a massive search to save the girl and kill the marauding creature.

Like much sci-fi horror of its era, Revenge of the Creature is as much about human hubris as anything. The Gill Man lives quietly in his lagoon, eating birds and leaving the human world alone, until the hunters show up and enslave him. Dragged to Florida and put on display, the creature tries to fight back, but his scenes of violence are less unnerving than the way he sits mournfully on an anchor in his tank, clearly pining for his freedom and his peaceful Amazonian home. The film makes a point of telling us that the Gill Man is almost human, and certainly human enough to regard Helen as an object of desire, but the scientists never confront the burden of responsibility that places on them for their mistreatment of him. When Helen visits the tank, the creature regards her intently, staring through the glass with an alien face but a human sense of loneliness and longing. If the film has a single dominant flaw, it lies in the human characters' refusal to admit the wrong that they have done by forcing the creature to be their guinea pig and spectacle; the Gill Man lacks an advocate to articulate his side of this story, although the camera tries hard to make the audience imagine what he must feel.

In other aspects, too, the picture relies on familiar tropes and figures to carry the action along. There's plenty of scientific talk, mingled with casual sexist assumptions, in the dialogue between Clete and Helen. Numerous set piece scenes display panic and pandemonium when the creature breaks loose, including the obligatory child left in peril. Like King Kong before him, the Gill Man carries off his lady and leaves havoc in his wake, but his need to be close to water keeps him from straying too far ashore. Luckily for him, the coast of Florida offers water in abundance, although the movie doesn't explain how a freshwater river creature survives in a salt water marine tank or the Atlantic Ocean. The performances of John Agar and Lori Nelson as the primary human characters are solid if not brilliant, but the movie really belongs to the lovelorn Gill Man, played in the water by Ricou Browning and on land by Tom Hennesy, both uncredited in spite of their excellent work in the awkward costume.

The Gill Man makes a third appearance in The Creature Walks Among Us (1956), and you'll also find him in Fred Dekker's 1987 love letter to Universal monsters, The Monster Squad. Jack Arnold's other directorial efforts include It Came from Outer Space (1953), The Incredible Shrinking Man (1957), and The Mouse That Roared (1959). John Agar was still getting started as a sci-fi B movie star in 1955, but fans know that he went on to become a staple of the genre in pictures like Tarantula (1955), The Mole People (1956), and Attack of the Puppet People (1958). Look for Lori Nelson in Bend of the River (1952) and Ma and Pa Kettle at Waikiki (1955); she and John Agar were reunited for the low-budget horror sci-fi spoof, The Naked Monster (2005), in which Nelson also plays Helen Dobson and Agar appears again as Clete Ferguson. For a different, and more articulate, take on the Gill Man type, check out Abe Sapien in Hellboy (2004) and Hellboy II: The Golden Army (2008).


Post Script Trivia - Oddly enough, Revenge of the Creature marks the screen debut of Clint Eastwood, who has an uncredited role as one of the lab scientists.

Posted by Jennifer Garlen at 4:19 PM