Classic Films in Focus: THE BEST YEARS OF OUR LIVES (1946) 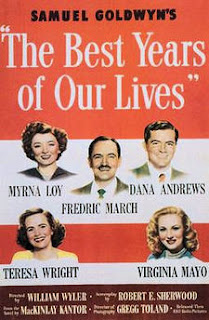 The Best Years of Our Lives (1946) is a different kind of war story, but its focus on the domestic aftermath of World War II is still powerful today, nearly seventy years after its original release. It certainly spoke to the cultural moment in 1946, winning seven Academy Awards out of eight nominations, including Best Picture, Best Director, Best Actor, and Best Supporting Actor. Moving, thoughtful, and packed with great performances from first-rate stars, The Best Years of Our Lives is one of those classic pictures that everyone should see, especially those interested in the toll of the war on the men who fought it and the families who were left behind.

Fredric March plays former banker Al Stephenson, who returns from years of service in World War II and struggles to resume his civilian life. His wife, Milly (Myrna Loy), has waited faithfully, but his children have grown up in his absence, and his perspective has been permanently altered by his wartime experiences. His companions on the return trip face problems of their own. Fred (Dana Andrews) suffers from traumatic memories of his time as a combat pilot and finds himself unable to land a decent job, while his materialistic wife (Virginia Mayo) resents their poverty and his intrusion on her independence. Homer (Harold Russell), a young sailor, struggles the most; having lost both of his hands in the war, he angrily rejects his family's pity and questions whether his devoted high school sweetheart (Cathy O'Donnell) really wants him for a husband.

Although March won Best Actor for his performance, the strength of the picture really relies on the combined efforts of the ensemble cast, with each character adding a distinct personality and perspective. Director William Wyler weaves the stories together so that each narrative thread gets the attention it merits, and each actor gets a chance to shine. Dana Andrews offers a compelling look at the loss of importance a returning war hero might experience as well as the effects of PTSD, and Fred's crumbling marriage provides a stark contrast to the gentler romantic experiences of Al and Homer. Not every girl waited for her guy to come home, and not every couple could pick up where they left off when the war was over. The film, however, wants to reassure audiences still piecing their own lives back together, so Fred discovers a better love interest in Al's daughter, Peggy (Teresa Wright), who reacts very differently than Fred's wife to his financial problems and his frequent nightmares. Harold Russell, a non-actor who had lost his hands in a military training accident, gives viewers a moving and utterly realistic picture of the wounded veteran's post-war life as Homer, who uses metal hooks strapped to his stumps in place of his lost limbs. Russell might not have the Hollywood looks of his costars, but that only strengthens our sense of his role as an everyman, a regular, all-American guy who might be anyone's brother, son, or sweetheart. The Academy gave Russell an Honorary Oscar for inspiring veterans, never guessing that he might actually win Best Supporting Actor for his role, so Russell ultimately made Oscar history by winning two awards for a single performance.

Unlike war movies that rallied American commitment to the effort during the war or glorified its battles afterward, The Best Years of Our Lives never shows a single combat scene, even in Fred's flashback moments in the cockpit of a decommissioned plane. It does not aim to depict the adrenaline fueled, masculine world of the war itself, but rather the workaday world of jobs and wives and quiet nights at home that follow when the battlefields are left behind, when men must figure out how to be ordinary citizens again and women must learn to love them in spite of how they have changed. Al drinks too much, Fred wakes up screaming, and Homer pushes away the people who care about him most. Each has been irrevocably altered by his experiences, but each works hard to find a way forward. Milly and Homer's girl, Wilma, face their own problems in trying to build futures with these new versions of once familiar men, while Fred's wife, Marie, is unwilling or unable to accept the struggling, humbled civilian after the conveniently absent hero. She's the only person who seems genuinely sorry that the war is over. For her, perhaps, the best years of her life were those when Fred's paycheck arrived without Fred to tell her how to spend it, but for the others, we hope, the years alluded to in the film's title lie ahead. In 1946 it was still an open question, but in the film that hope glimmers like a fervent, quiet prayer. Hadn't these men and women, who had sacrificed so much, earned it with their blood and tears?

Take the time to appreciate Hoagy Carmichael and Gladys George in small supporting roles as the pianist, Butch, and Fred's stepmother, Hortense. William Wyler won two additional Best Director Oscars for Mrs. Miniver (1942) and Ben-Hur (1959), with a total of twelve Best Director nominations over the course of his impressive career. For more of Fredric March, see Dr. Jekyll and Mr. Hyde (1931), The Barretts of Wimpole Street (1934), and I Married a Witch (1942). Myrna Loy is best remembered as William Powell's witty costar in The Thin Man movies, but check out Pre-Code roles in Thirteen Women (1932) and The Mask of Fu Manchu (1932) for a contrast to her later, more maternal persona. Don't miss Dana Andrews in The Ox-Bow Incident (1943), Laura (1944), and Beyond a Reasonable Doubt (1956). If you like Virginia Mayo's bad girl act, be sure to catch her in White Heat (1949).

Posted by Jennifer Garlen at 2:44 PM