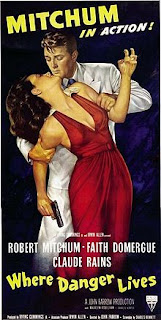 Robert Mitchum takes another dive into darkness in Where Danger Lives (1950), and once again he plays an easy mark for a dangerous dame, this time embodied by the sultry Faith Domergue. An icon of film noir, Mitchum made more celebrated forays into the genre both before and after this outing, but Where Danger Lives has much to offer in its 82 minutes of twisted flight, thanks to expert direction from John Farrow and gripping performances from Mitchum, Domergue, and the perpetually brilliant Claude Rains. Like many noir films, Where Danger Lives depicts people's lives crashing into ruin in spectacular fashion, but the peculiarly bent nature of Domergue's femme fatale gives this story an extra shot of the strange and perverse.

Mitchum plays a young doctor named Jeff Cameron, who unexpectedly meets trouble when the seductive Margo Lannington (Faith Domergue) tries to commit suicide and is placed under his care. Almost immediately, Margo and Jeff begin a steamy romance, and Jeff decides to dump his steady girlfriend, Julie (Maureen O'Sullivan), in order to marry Margo. Jeff finds out too late that Margo is already married, and her husband (Claude Rains) ends up dead after an altercation with Jeff. Dizzy and disoriented from a concussion sustained in the fight, Jeff accompanies Margo on a run for the Mexican border, but her mental instability and the pair's bad luck get worse with every passing hour.

Jeff is one of Mitchum's most straight-laced and passive noir protagonists, just a normal young professional until Margo tempts him into the depths. Admittedly, his resistance is pretty weak, especially when he already has a good match in Julie, who lacks Margo's glamor but shares Jeff's professional world and is grade A wife material. Once he's in over his head, Jeff lets Margo take the lead, largely because he keeps passing out thanks to a poker blow from Margo's husband, but also because Margo constantly manipulates the situation to her own ends. Mitchum's best scenes are the woozy ones, where he doesn't really know what's going on and has to plunge ahead in spite of it, always getting himself deeper and deeper into Margo's crazy scheme. Faith Domergue, perfectly cast as the unstable siren, has her finest moments when Margo is at her worst; the wildest, most maniacal actions light a strange fire in her dark eyes, and we believe that she's capable of anything. Her scenes with Rains are electric; he has just a hint of madness about him, too, so that we understand their attraction to each other as well as their mutual hatred. Sadly, Rains' character gets killed off early in the picture, but his warnings haunt Jeff until the end. "If you take her," Lannington tells Jeff, "it's a long road. There's no turning back!" Like Edward G. Robinson's trolley car speech in Double Indemnity (1944), the admonition proves prophetic.

From the moment Jeff and Lannington have their fatal encounter, the action of the picture never lets up, but the protagonists are driven forward more by cruel quirks of fate than their own intentions. Jeff and Margo think the police are after them long before Lannington's body is actually found, which forces them to abandon their plan to fly to Mexico in favor of a more dangerous journey by car. They make rookie mistakes; neither is an experienced criminal, so they get into more jams and become more desperate with each new error. For Jeff, drifting in and out of consciousness, the trip has a nightmarish quality, reflected in the desolate landscapes and strange characters they encounter. All around them are opportunists, eager to take advantage of their obvious problems, like the car dealer who profits by swapping an antiquated clunker for their car and even gets Margo's forgotten fur coat into the bargain. There's a darkly comical element to many of their misadventures, especially the town that forces them to stop and get married because of some goofy local festival going on. In a screwball comedy it would be the start of marital bliss, but in this setting it's a perverse punishment, giving Jeff exactly what he thought he wanted at a point where he no longer wants it. When he finally realizes the extent of Margo's madness, it's too late to walk away; Jeff and Margo can only be separated by the same kind of violence that first brought them together, and the finale is an explosive confrontation on the Mexican border, a symbolic line that mirrors the film's juxtapositions of good and evil, sanity and madness, and life and death.

For more of Mitchum's noir films, see Out of the Past (1947), The Racket (1951), and Angel Face (1952); he also worked with John Farrow on His Kind of Woman (1951). Faith Domergue's career never quite came together, but you can find her in The Duel at Silver Creek (1952), Santa Fe Passage (1955), and This Island Earth (1955). Catch Claude Rains making other noir turns in Moontide (1942), Notorious (1946), and The Unsuspected (1947). John Farrow also directed Wake Island (1941), for which he won an Oscar for Best Director, Alias Nick Beal (1949), and Hondo (1953). Maureen O'Sullivan, best remembered as Jane to Johnny Weissmuller's Tarzan, was married to John Farrow; the two worked together on The Big Clock (1948) as well as Where Danger Lives, but their most famous collaboration would be their actress daughter, Mia Farrow, the third of their seven children.

Posted by Jennifer Garlen at 2:00 PM