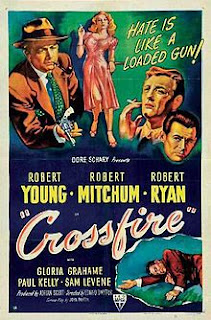 Shadowy cinematography and a twisted murder plot make Crossfire (1947) seem like standard noir fare, but this movie also has a serious message for its audience about the dangers of prejudice and bigotry. Anti-Semitism is the particular concern, with the murder of a Jewish man setting the action in motion, but the film encourages us to recognize the connections between this type of hatred and many others. Moral purpose does not, however, lessen the entertainment value of the picture as a whole; director Edward Dmytryk has a top-notch cast to work with, including Robert Young, Robert Mitchum, and Robert Ryan, with Gloria Grahame also putting in a memorable appearance. Five Oscar nominations, including a nod for Best Picture, prove that Crossfire struck a chord in Hollywood in the late 1940s, and it still has a lot to say to viewers today.

Robert Young plays police detective Finlay, the man in charge of figuring out who killed Joseph Samuels (Sam Levene). Evidence seems to incriminate Corporal Mitchell (George Cooper), one of three soldiers known to have been drinking with Samuels at a bar that night. Mitchell's friend, Keeley (Robert Mitchum), believes that Mitchell is innocent and tries to protect him from the police until the truth can be revealed, but even Mitchell isn't quite clear about what happened. The only people who seem to know what really took place are Mitchell's companions, Montgomery (Robert Ryan) and Floyd (Steve Brodie), and they have their own reasons for letting Mitchell take the blame.

Robert Ryan earned an Oscar nomination for Best Supporting Actor for his performance, which drives the picture forward and increases in intensity as the investigation proceeds. Early on, Ryan's character tries to pass himself off as an average guy and upstanding citizen, but Robert Mitchum's Keeley quickly casts doubt on his motives, and Montgomery gives himself away as a bigot with his cracks to Finlay about non-soldiers and people with "funnier names" than Samuels. Ryan plays Montgomery as a stick of dynamite always ready to explode; he shifts from false friendliness into dangerous rage at the barest provocation, making even his unit mates afraid of him. Next to Montgomery, George Cooper's Mitchell looks like a lamb led to the slaughter, and he's actually one of the film's most passive characters, drifting through a mental haze and completely led by the smarter and more active Keeley. During Mitchell's night of confused rambling, he encounters a jaded but ultimately sympathetic working girl, Ginny, played to great effect by Gloria Grahame, who also picked up an Oscar nomination for her performance.

Although anti-Semitism serves as the picture's specific focus, Crossfire invites the viewer to see this kind of prejudice as just one instance of a larger problem. Finlay draws a pointed comparison between the way Jews are mistreated in the 20th century and the way Irish Catholics were abused in the 19th, and he also observes that a minor character, Leroy (William Phipps), is subjected to similar treatment by Montgomery simply for being from Tennessee. Anti-Semitism stands in for all kinds of prejudice, even within the context of the story's production history; in The Brick Foxhole, the original novel by Richard Brooks, the subject was homophobia, but RKO knew that kind of story would never get past the Breen Office, and the screenplay changed the identity of the victim. Crossfire was not the only 1947 picture to deal with the topic of anti-Semitism; the Best Picture winner for that year was Gentleman's Agreement, in which Gregory Peck plays a reporter who pretends to be Jewish in order to find out about bigotry and prejudice for himself. Gentleman's Agreement went home with eight nominations and three wins, while Crossfire struck out with all five of its nominations, but the two movies still make for a provocative double feature.