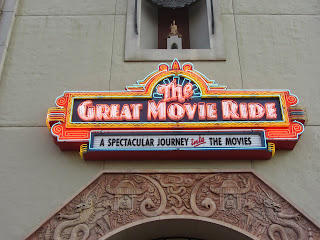 The Great Movie Ride at Disney's Hollywood Studios is due for a makeover as part of a new partnership with Turner Classic Movies, but it appears that classic film fans will have to wait longer than the original target date of Spring 2015 to see the updated look of the attraction. As of May 2015, there is still no sign of the upgrades or TCM's sponsorship of the ride, which takes guests on a whirlwind tour of classic favorites like Singin' in the Rain, Mary Poppins, and The Wizard of Oz.

For those (like myself) who enjoy the nostalgic attraction, the announcement of the TCM partnership was good news all around. The Great Movie Ride has been a staple at the park since 1989, but its focus is decidedly old school compared to more popular rides like Star Tours and The Tower of Terror. Many guests certainly don't get the enthusiasm for old movies, and some treat it like the Studios' version of The Hall of Presidents, i.e. a really good place to take a nap. The TCM partnership signals the park's determination to keep The Great Movie Ride around even though massive renovations are on the horizon at Studios over the next few years.

According to the TCM announcement from November 2014, the refurbishment of The Great Movie Ride will include a new pre-ride video featuring Robert Osborne, a new montage at the end of the ride, and a photo opportunity for guests with a classic movie theme. The queue area will also get TCM branding and new digital movie posters to entertain guests while they wait. While it would be great to have a gift shop offering classic movie themed souvenirs, it's unclear right now whether the photo op area will include anything else that guests can take home from their adventure through film history. (Dear Disney, I do believe in fairies, I'm wishing upon a star, and I want a proper classic movie gift shop!)

While there's a lot of construction and renovation going on all around Walt Disney World right now, it seems that the updates to The Great Movie Ride are somewhat lower on the priority list. At least with the Sorcerer Mickey hat no longer obscuring the view, the ride has better visibility at the center of the park. Let's hope that Robert Osborne and the new TCM trappings will make their appearances soon.
Posted by Jennifer Garlen at 10:24 AM