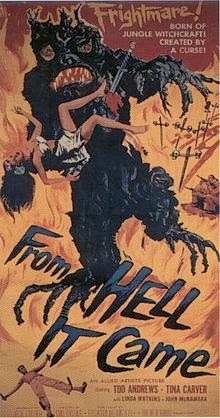 Most viewers can recognize the appeal of a celebrated masterpiece like Citizen Kane (1941), but it takes a special kind of film fan to appreciate an unqualified turkey like From Hell It Came (1957), an Atomic Age explosion of bad acting, execrable dialogue, and one of the dumbest movie monsters you could ever hope to see. Like Plan 9 from Outer Space (1959) and Attack of the Giant Leeches (1959), From Hell It Came represents the sublime rock bottom of cinema, a movie so bad it's absolutely delightful to watch, provided you bring your own peanut gallery and something squishy to throw at the screen.

The story opens with the execution of Kimo (Gregg Palmer), a South Sea Island prince whose demise is engineered by a tribal witch doctor and his accomplices. Bent on revenge, Kimo returns from the dead as the tree monster, Tabanga, who lumbers after his enemies in order to dispatch them. Caught in the middle of the local turmoil are several American scientists who are on the island to investigate potential radiation from government testing. At first, they see Tabanga as a prize scientific discovery, but they soon learn that the ambulatory plant is stronger and more deadly than they imagined.

The tropical setting is used mostly as a justification for racist platitudes about the "simple" natives and their customs, although their belief in a vengeful walking tree turns out to be perfectly reasonable. The plot presents the natives as a collection of the usual stereotypes, with the evil witch doctor, the island temptress, the native ingenue, and the noble prince all making appearances. Of course, very few of the natives are played by people with even the remotest claim to Polynesian descent, and most of them look - and sound - absolutely ridiculous in their island garb.

Sexism also gets plenty of play, with the attractive scientist, Terry (Tina Carver), constantly badgered by her boyfriend, Bill (Tod Andrews), to give up her career in favor of marriage and a "normal" life. The eager career girl is the one who first urges the team to uproot Tabanga in order to study him, but her feminine weakness for high heels - even on a jungle island - makes her an easy target for the shuffling tree monster. It's unclear how Tabanga's attack suddenly convinces Terry to accept Bill's proposal (is it post-traumatic shock?), but the ending suggests that wedding bells and baby carriages aren't far off for the American couple. We can only imagine the sadly domesticated Terry back in the States, pushing a pram through the park and eying every rustling elm with a nervous expression.

Be sure to savor Linda Watkins' really atrocious English accent as the lusty widow, Mrs. Kilgore; she makes Dick Van Dyke's Bert in Mary Poppins (1964) sound like a shining pearl of linguistic authenticity. Director Dan Milner also made the equally awful 1955 picture, The Phantom from 10,000 Leagues. If really bad, laugh until it hurts, B movies are your idea of a good time, try other classic turkeys like Night of the Blood Beast (1958), The Killer Shrews (1959), and Night of the Lepus (1972), or turn to modern parodies of the genre like Teenage Catgirls in Heat (1994) and The Lost Skeleton of Cadavra (2001).

From Hell It Came is currently available on Warner Archive Instant.
Posted by Jennifer Garlen at 4:02 PM