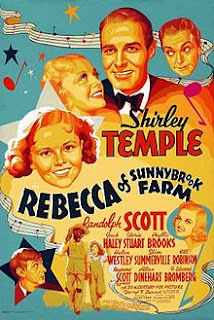 For family friendly classic movies, it's hard to beat Shirley Temple's pictures. Admittedly, they follow a certain formula, but they're short, sweet, and often spiced with interesting supporting players. Directed by Allan Dwan, Rebecca of Sunnybrook Farm is an excellent example of the usual Temple set-up, although fans of the 1903 novel by Kate Douglas Wiggin will be disappointed by the movie's mere lip service to the original text. Even classic movie buffs who aren't particularly wild about Shirley Temple can enjoy Rebecca of Sunnybrook Farm for its star-studded cast, which includes not only Randolph Scott and Gloria Stuart but also Jack Haley, Bill Robinson, and William Demarest.

Temple, of course, plays a sweet little girl in need of a home. This time she's Rebecca Winstead, initially under the suspect care of her stepfather, Uncle Harry (William Demarest), who tries to sell the kid into a show business contract during a radio contest. Harry pawns Rebecca off onto her aunt Miranda (Helen Westley) when he thinks his plans have failed, although radio executive Tony Kent (Randolph Scott) is really interested in having Rebecca on the air. Luckily, Tony's country retreat happens to be next door to Aunt Miranda's farm, which allows Rebecca to pursue her chance at stardom and promote a romance between Tony and her cousin, Gwen (Gloria Stuart).

Temple gives a reliably spunky, cute performance, with several song numbers and a nice dance routine with Bill "Bojangles" Robinson, who appeared with her in several films. Jack Haley, best remembered today for his role as the Tin Man in The Wizard of Oz (1939), doesn't dance this time but makes great use of his comic talent as Kent's bumbling assistant, and he does get to sing a bit. Gloria Stuart and Randolph Scott make fine romantic leads and prospective parents for the pint-sized heroine, and Scott has an especially affable charm once we move to the country scenes. Some romantic squabbling between Temple regular Helen Westley and lanky character actor Slim Summerville provides additional comic relief. The most surprising member of the cast might be William Demarest as Rebecca's oily, shiftless stepfather; he's not a very terrible villain, just a cupcake compared to some of Temple's female adversaries in other pictures, but his skill at the pratfall comes in handy, and he's certainly believable as a two-bit grifter.

For more films from Temple's heyday, try Stowaway (1936), Heidi (1937), and The Little Princess (1939). Cowboy star Randolph Scott played mostly in Westerns, including Jesse James (1939), The Tall T (1957) and Ride the High Country (1962), but he also appears with Temple in Susannah of the Mounties (1939). Gloria Stuart gained early fame for roles in films like The Invisible Man (1933) and then earned an Oscar nomination near the very end of her life for Titanic (1997). Look for William Demarest in celebrated classics like Mr. Smith Goes to Washington (1939), Sullivan's Travels (1941), and The Lady Eve (1941). He earned an Oscar nomination for Best Supporting Actor for The Jolson Story (1946) but gained more lasting fame for his role on the television series, My Three Sons. Director Allan Dwan, who had started out back in the silent era, also directed Heidi and the John Wayne war picture, Sands of Iwo Jima (1949).

An earlier version of this review originally appeared on Examiner.com. The author retains all rights to this content.
Posted by Jennifer Garlen at 12:22 PM