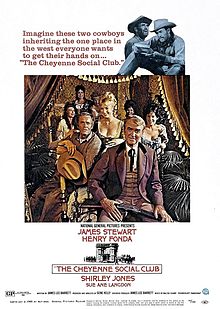 The names attached to The Cheyenne Social Club (1970) might reasonably give a viewer certain expectations of greatness, but director Gene Kelly's easy-going Western is content to let its stars, Jimmy Stewart and Henry Fonda, amble companionably through its mildly interesting plot, which takes the pair off the Texas range and into the well-appointed - if morally suspect - rooms of the title location. What we get as a result is a cowboy buddy movie compounded with a fish-out-of-water plot, nothing revolutionary or particularly ambitious, but amusing enough thanks to the two stars' natural camaraderie and the bustling good humor of the supporting actresses who play the social club's attractive commodities. This is by no means the best Western ever made by either actor, but those who appreciate the oaters Stewart and Fonda made earlier in their careers will probably enjoy this one, too, and those who know something about the stars' real-life friendship will like it even more.

Stewart plays John O'Hanlan, an aging Texas cowboy who unexpectedly inherits his dead brother's business in Cheyenne. Little suspecting the nature of his brother's establishment, John and his talkative sidekick, Harley Sullivan (Fonda), ride to Cheyenne to claim the inheritance. John is dismayed when The Cheyenne Social Club turns out to be a brothel, stocked with a bevy of attractive young women and headed up by Jenny (Shirley Jones) in the absence of the actual owner. Unfortunately, John finds it difficult to shut the place down, and he becomes embroiled in a series of deadly encounters when a local tough (Robert J. Wilke) beats Jenny.

O'Hanlan provides the fish-out-of-water theme, constantly stymied by the women, the townspeople, and the very idea of the brothel. His laconic, conservative nature contrasts with that of garrulous, free-wheeling Harley, who samples the ladies' wares with enthusiasm but balks at being drawn into O'Hanlan's fights. Stewart and Fonda invest these characters with completely credible cowhand personalities; both had made many Westerns in the earlier decades of their careers, and they know exactly the right way to ride a horse, handle a rifle, and chew or spit a line like a plug of tobacco. Their banter draws attention to the actors' long-standing friendship and the differences between them, especially in the realm of politics, but it does so without undermining the characters they're playing. Like Stewart and Fonda, John and Harley have a relationship that transcends their disagreements, even if they themselves don't always understand why.

The movie is technically a comedy, but it's not an uproarious one. The humor relies mostly on John's initial discomfort about the brothel and then his paternal attitude toward its denizens, with Harley's randy adventures with the girls providing some sense of a romp. Like other Westerns of its era, The Cheyenne Social Club reflects a genre in flux, trying to be several things at once in the wake of the traditional Western's slow demise. It falls back on a lot of classic Western motifs, but the brothel plot winks at the rise of the sex comedy and tries to make the picture hip for a younger and more sexually liberated audience. It doesn't necessarily succeed, but it has enough good nature to make up for many of its faults.

Gene Kelly is best remembered today as a song-and-dance actor, but in addition to The Cheyenne Social Club he also directed The Tunnel of Love (1958), A Guide for the Married Man (1967), and Hello, Dolly! (1969). His most successful films, however, were those he co-directed with Stanley Donen, including Singin' in the Rain (1952). Jimmy Stewart's first Western was Destry Rides Again (1939), but you'll also find him starring in a series of excellent oaters from Anthony Mann, particularly Winchester '73 (1950) and The Man from Laramie (1955). See The Man Who Shot Liberty Valance (1962) and The Shootist (1976) for Stewart's late-career performances with cowboy icon John Wayne. Henry Fonda's early Westerns include Jesse James (1939), The Ox-Bow Incident (1943), and My Darling Clementine (1946), but he also makes an unusual foray into villainy in Sergio Leone's Once Upon a Time in the West (1968). For more of Shirley Jones, see Oklahoma! (1955), Carousel (1956), and The Music Man (1962), as well as the television series, The Partridge Family. You can also see her with Jimmy Stewart in another Western, Two Rode Together (1961).

The Cheyenne Social Club is currently available on Warner Archive Instant and for $2.99 on Amazon Instant Video.
Posted by Jennifer Garlen at 11:53 AM