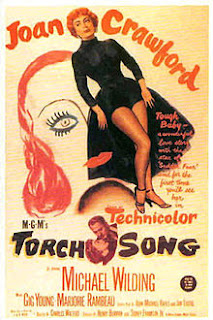 Television viewers of a certain age might remember Torch Song (1953) primarily as the butt of a spot-on parody on The Carol Burnett Show, in which Burnett offers a hilarious spin on Joan Crawford's performance in the classic melodrama. It's true that Torch Song, directed by Charles Walters, operates at a pitch that invites such skewering; women's pictures typically favor emotional excess, and Crawford has a particular talent for it, which is why she became such a huge star in that genre in the first place. If, however, you have a taste for weepies, there's a lot to enjoy in this film, not only in the troubled romance between the two leads but also in a number of solid supporting performances, including appearances by Harry Morgan, Gig Young, and Marjorie Rambeau.

Crawford stars as Broadway success Jenny Stewart, whose wealth and fame fail to protect her from years of bitter loneliness. Relentlessly demanding of everyone around her, Jenny finds herself in conflict with her new accompanist, a blind war veteran named Tye Graham (Michael Wilding). As she learns more about him, Jenny's feelings evolve, but his repressed anguish about his blindness keeps him from telling her how long he has loved her from afar.

As the plot summary suggests, there are untold stories that lurk behind the main plot of the film, and these stir the viewer's imagination and build sympathy with the central characters. We don't know how Tye Graham was blinded in the war, and we don't know what he has been doing all these years, although it was obviously enough to afford a very nice apartment. We only get a feeling about the toll that those same years have taken on Jenny; our idea of her as a young newcomer, fresh and lovely, flits around the edges of the story like a beautiful ghost of Broadway past. That idea lives primarily in the memory of Tye, who cannot see the older Jenny but can hear the strain in her voice and the deep-rooted unhappiness that inspires her harsh words. We also only get glimpses of Jenny's rocky relationship with her boyfriend, Cliff (Gig Young), but it's enough to convince us that neither of them is doing the other any real good.

Crawford's intensity fits perfectly with her character, who is so driven that she worries over every aspect of her play, from the costumes and the dance steps to the songs and the lights. The actress does not do her own singing in most of the picture, but her dancing, though somewhat limited, is more graceful and attractive than that seen in earlier work like Dancing Lady (1933). Her hair color at first seems an unfortunate choice, but, as it turns out, the color of her hair is an important plot point, and the less flattering shade functions as a provocative commentary on the way in which the aging Jenny resists the march of the years. Michael Wilding's mildness and blind stare as Tye contrast with Jenny's fierce temper and flashing eyes, and the two stars work well together, particularly in the climactic scene when their characters' roles are finally reversed.

Of the supporting players, Marjorie Rambeau merits special attention; she earned an Oscar nomination for Best Supporting Actress for her performance as Jenny's blue-collar mother, who really loves her famous daughter even though she's not above pumping her for cash. Gig Young makes a likable if useless leech as Jenny's drunken playboy beau, and Harry Morgan reveals stores of long-suffering patience as the theater director who has to put up with Jenny's constant demands. Maidie Norman also puts in a fine performance as Jenny's household manager, who is not so much a maid as a personal assistant, and, apparently, one of the few people with whom Jenny actually behaves herself.