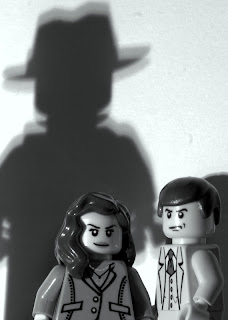 Our LEGO club met today, and I gave a short talk about LEGO photography, a hobby which conveniently rolls several of my passions into a single activity. A friend of mine who has a nicer camera than I do came over afterwards, and we played around with lighting and different exposure lengths and lenses to take these shots. 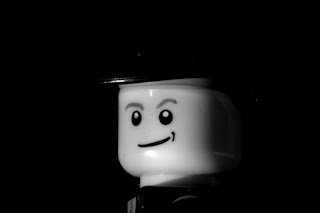 My obsession with The Third Man (1949) continues unabated, so we tried some different shots inspired by stills from that film. The first one shows Joseph Cotten and Alida Valli menaced by the shadow of Orson Welles as the mysterious Harry Lime. I like the way the original shot highlights Harry's role as a "third man" in the romance between the two protagonists. The second shot recalls the first time that we see Harry Lime in the picture, suddenly illuminated in a shadowy doorway and smiling enigmatically at Cotten's confused hero. My friend, Le, used a very long exposure to get this one lit up, and I enhanced its shadows and highlights in Picasa afterwards. 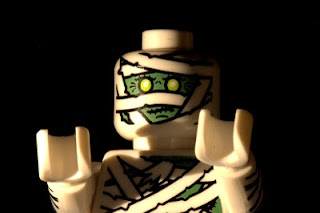 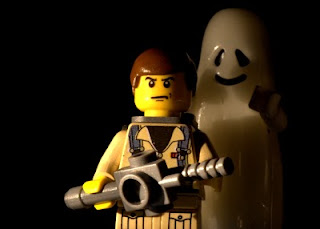 Once we realized that we could shoot great closeup images using the long exposures, we decided to try it with a few other minifigures. I had seen someone else do some gorgeously spooky shots of the mummy fig, and I do think ours turned out well, too. Just for fun, we took one of a Ghostbuster being stalked by a ghost. I got the Ghostbuster decals and equipment from Brick Forge, and they really look great. One day we'll have to do a whole series of photos from that film (if I can get enough decals for the whole team!).
Posted by Jennifer Garlen at 7:45 PM