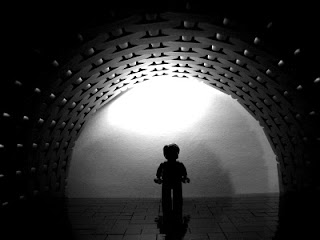 I'm a huge fan of Carol Reed's post-war noir classic, The Third Man (1949), which means that I naturally wanted to recreate images from the film in LEGO. I'm not entirely satisfied with these, but I'm going to keep working on a definitive LEGO version of some image from the film. A friend with a wide angle lens has offered to come over and see if we can make the tunnel seem deeper. Hopefully that will help! 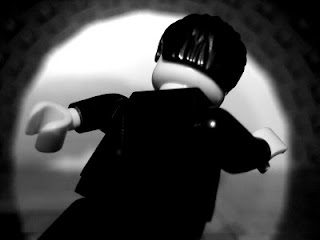 In the film, Joseph Cotten arrives in the still-smoking wreck of post-war Vienna looking for an old friend who has promised him a job. Cotten's character is a writer, which of course means that he's broke, so he needs the work. Unfortunately, he gets there just in time for the friend's funeral. The mysterious and supposedly deceased friend is a guy named Harry Lime, played by an astonishingly handsome Orson Welles. Harry is thought to be dead for the first part of the movie and then presents himself as a thoroughly enigmatic figure in the second half, so it's appropriate that most of the publicity stills for the film show him in shadow or shoot him so that his face remains unseen. 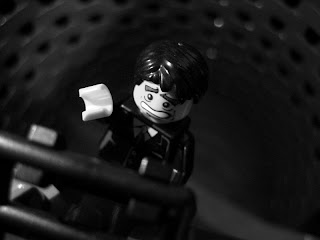 The movie ends with a brilliant chase sequence through the dark tunnels beneath Vienna. Many of the publicity stills feature this shadowy underworld, and so I have represented it here. The LEGO tunnel is built using a technique that allows for a curved shape, but it can only be bent so far, which means that my tunnel is not as narrow as I would like. I do like the shot in which Harry is trying to escape up a ladder out of the tunnels; my minifig actor certainly has the right expression of panic.
Posted by Jennifer Garlen at 2:52 PM