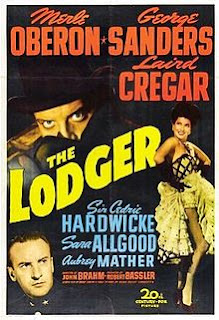 There have been plenty of Jack the Ripper movies in the history of cinema, but few can lay claim to the eerie charms of director John Brahm's 1944 picture, The Lodger, which stars the incomparable Laird Cregar as the mysterious title character. Adapted from a novel by Marie Belloc Lowndes (which had already been adapted into a 1927 film by Alfred Hitchcock), this delirious tale of murder and monstrosity basks in the ambience of gaslight London and builds suspense not through any doubt about the killer's identity but through the audience's ironic knowledge of the psychopath hidden in plain sight.

When Mr. Slade (Laird Cregar) first rents a set of rooms, his landlady (Sara Allgood) is only too happy to have the additional income, even though the grisly Ripper murders have set all of London on edge. Slowly, however, the family begins to notice odd parallels between their lodger's activities and the ensuing attacks, although the landlord (Cedric Hardwicke) passes them off as mere coincidence. The landlady's beautiful niece, Kitty (Merle Oberon), tries to engage Mr. Slade's friendship and interest, but his reaction to her is puzzling and sinister. In the meantime, a handsome police inspector (George Sanders) becomes concerned for Kitty's welfare because all of the Ripper's victims have been associated with the stage, but the entire force might not be enough to save her from the deranged killer's dangerous obsession.

Although Merle Oberon and George Sanders get top billing as the picture's leads, the film really belongs to Laird Cregar, and it's his performance that makes The Lodger so effectively creepy and compelling. He brings touches of sadness and humanity to his madman, especially when he laments the tragic death of his beloved brother. Like all great monsters, Slade is all the more terrible for being an object of pity as well as horror; he has that sublime quality so often praised in characters like Frankenstein's monster, the Wolf Man, and Peter Lorre's pathetic serial killer in M (1931). By the end of the movie, as he lurches through the theater trapped and bleeding, we see Cregar's character as his own ultimate victim, and his death is more tragedy than triumph, the inevitable result of urges that could not be controlled. In the last scene, the camera frames him like a wild animal caught in a corner, with the circling policemen closing in like hounds at bay, and his final desperate act creates a fatal poetry that the survivors note in the film's closing lines.

You'll find more of the exotic Merle Oberon in The Dark Angel (1935) and Wuthering Heights (1939). George Sanders, who won a Best Supporting Actor Oscar for his role in All About Eve (1950), turns up in several other memorable films, including Rebecca (1940), The Black Swan (1942), and The Picture of Dorian Gray (1945). Laird Cregar, whose career was cut tragically short, can also be found in The Black Swan (1942), and he makes a delightful Devil in Heaven Can Wait (1943). Cregar, Sanders, Brahms, and screenwriter Barre Lyndon all return for Cregar's final picture, the effective thriller, Hangover Square (1945).

This review was originally posted on Examiner.com. The author retains all rights to this content.
Posted by Jennifer Garlen at 4:51 PM