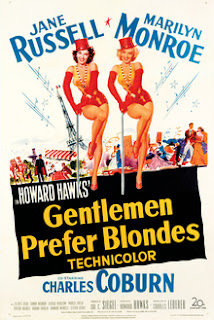 Marilyn Monroe became a true star thanks to Gentlemen Prefer Blondes (1953), the Howard Hawks directed adaptation of the Broadway musical hit in which Carol Channing had originated the role of Lorelei Lee. Monroe's take on "Diamonds are a Girl's Best Friend" remains one of her most memorable moments, with numerous imitations, homages, and parodies, but the best way to appreciate the number is to see the whole film, in which Monroe and costar Jane Russell light up the screen as a pair of entertainers on a cruise ship full of attentive men. Notable costars include Tommy Noonan, Charles Coburn, and Elliott Reid, although child actor George Winslow proves the scene stealer of the lot as the youngest of Lorelei's admirers.

Monroe plays Lorelei Lee, a gorgeous opportunist who "can be smart when it's important" but knows that rich men aren't looking for intellectual genius in a bride. When her besotted millionaire boyfriend (Tommy Noonan) proposes, his father tries to break up the match by hiring a private detective (Elliott Reid) to keep tabs on Lorelei as she and her friend, Dorothy (Jane Russell) sail to France. On the ship Dorothy falls for the charms of the detective, while Lorelei falls for the diamonds of "Piggy" Beekman (Charles Coburn), an elderly wolf with an appetite for Lorelei's assets.

Lorelei is definitely ditzy, but Monroe invests her with sweetness and vitality in addition to mercenary instincts, and Russell makes a great "smart cookie" counterpart. Their musical numbers together are lots of fun, even if Monroe's big solo proves the real showstopper of the picture. Russell's solo, "Ain't There Anyone Here for Love," is also a highlight, thanks mostly to Russell's lusty, winking performance but also partly the spectacle of exposed man flesh gyrating, flexing, and thrusting all around her. Russell has another big moment when Dorothy impersonates Lorelei in a French courtroom and derails the proceedings with her own rendition of "Diamonds are a Girl's Best Friend," the funniest part being her imitation of Lorelei's mannerisms and conniving but clueless behavior. All of the male actors provide solid support, with Tommy Noonan swooning at Lorelei's kisses and Charles Coburn constantly on the run from his overbearing wife, but the movie belongs to Monroe and Russell just like every room belongs to Lorelei and Dorothy the minute they enter it.

The persistent question that Gentlemen Prefer Blondes seems to be asking is whether a gold digger can still be a good woman, to which Dorothy and Lorelei emphatically say yes in spite of Lorelei's obsession with wealth and dalliance with Piggy. (It's the same question that How to Marry a Millionaire also asks, although Monroe's character in that picture is much less devoted to money than Lorelei). Dorothy has no interest in rich men, and even rejects the detective, Ernie, when she thinks he's a wealthy playboy, but she doesn't hold Lorelei's materialism against her. Lorelei argues that having money is the only way to ensure a happy marriage, and she even compares a man's wealth to a woman's beauty as equally valid requirements for a union.The "Diamonds are a Girl's Best Friend" number might overstate the case, but Lorelei has a point about money being the root of much marital unhappiness, and in a time when women were expected to be financially dependent on their husbands it was definitely better to marry a good provider than endure poverty yoked to a bad one. Lorelei, after all, isn't making any calculation that generations of careful mothers and ambitious debutantes hadn't been making for centuries before her, she's just more willing to admit that the cash and the jewels are the big attraction.

For a look at Marilyn's earlier roles, see The Asphalt Jungle (1950), All About Eve (1950), and Monkey Business (1952), the last of which Hawks also directed. Charles Coburn has particularly memorable roles in Bachelor Mother (1939), The Lady Eve (1941), and The More the Merrier (1943), and he also appears in Monkey Business with Monroe. Catch Jane Russell in The Outlaw (1943), The Paleface (1948), and His Kind of Woman (1951), as well as the sequel Son of Paleface (1952). In 1955, Russell starred Gentlemen Marry Brunettes, but the title is the only connection to the original film, and Russell plays a completely different character in the later story.

Posted by Jennifer Garlen at 4:10 PM