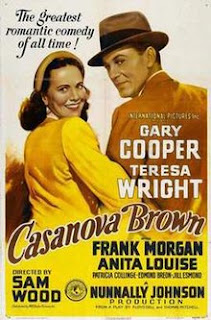 What does a viewer expect going into a movie that features multiple marriages, a burning mansion, a kidnapped baby, and a clueless new father on a crash course in infant care? Hilarity seems like a reasonable answer, but that's not what we get with Casanova Brown (1944). While its plot summary sounds like truly outrageous material for a screwball comedy, the end result is quite tame, with far quieter performances than one might expect in a story about characters who take everything to extremes. It's not a terrible film, but it's by no means a great example of the genre, especially when compared to Gary Cooper's better known foray into screwball comedy in the hilarious Ball of Fire (1941). Here Cooper lacks the high energy of a proper screwball heroine to react to, even though he has dueling leading ladies in Teresa Wright and Anita Louise. In the end, Casanova Brown is a modestly amusing picture that offers an instructive example of what makes screwball tick by leaving out an essential component.

Cooper plays Casanova Brown, a domesticated descendant of that other Casanova who stumbles into marriage rather more often than he should. On the eve of his wedding to the cosmopolitan Madge (Anita Louise), Cass discovers that his short-lived union with Isabel (Teresa Wright) has produced a child, whom Isabel plans to put up for adoption. Enamored at first sight of his newborn daughter and horrified by the idea of her being given away, Cass kidnaps the baby from the hospital and attempts to care for her while holed up in a local hotel. Meanwhile, both Madge and Isabel are searching for him with their fathers in tow.

There's certainly plenty of chaos and reversal on hand to fuel a screwball comedy. Cooper's Casanova is no Italian adventurer, much less a predatory seducer, but he still ends up at the altar with three different women. He seems to have a preternatural ability to create crises, as he does when his hastily hidden cigarette reduces Isabel's family home to a smoldering ruin, thus provoking the argument that ends his brief marriage. His reaction to Isabel's plan for their baby is to impersonate a doctor, make off with the infant, and then enlist half the hotel staff in his obsessive baby nursing efforts. Whatever the situation, Casanova Brown always seems to make exactly the wrong choice at the worst possible moment, and most of the film's best scenes rely on that disastrous trait.

The problem lies with the development of the two female characters, neither of whom clicks with Cooper or inhabits her role convincingly. I love Teresa Wright in other films, especially Shadow of a Doubt (1943), but here she seems so painfully young as a love interest for Cooper, and she's far too wounded and pitiful to be a proper screwball heroine. Her Isabel is a sad victim of her parents' foolishness, her groom's stubbornness, and her own inability to stand up for herself. Madge, meanwhile, who ought to be a scheming socialite man eater of the first order, is never even remotely awful enough to warrant being left at the altar. Moreover, Anita Louise looks far more age appropriate as a mate for Cooper than Wright (who was actually in her mid-20s in 1944 but looks so much like a kid that even Casanova mentions it), and one has to wonder about a man who prefers a childlike bride over an actual adult. The only real case made against Madge is the constant harping of her father (Frank Morgan) about how controlling and tight-fisted the Ferris women are, and it's clear that his resentment stems from his own greedy desire to run through his wife's fortune at the utmost speed. Louise might have made a more villainous Madge if the script provided any fodder, but Wright is flatly out of place, even if the role hadn't been so weakly written. Screwball needs screwy women to shake up the social order and disrupt expectations, and when they aren't present the picture falls flat.

Aside from Ball of Fire, try iconic screwball comedies like My Man Godfrey (1936), Bringing Up Baby (1938), Midnight (1939), or The Lady Eve (1941) to see the fireworks when everything goes right. Sam Wood, who directed Casanova Brown, was on firmer ground with more melodramatic material like Goodbye, Mr. Chips (1939), Kitty Foyle (1940), and Kings Row (1942), each of which earned him an Oscar nomination for Best Director. Gary Cooper won Oscars for Sergeant York (1941) and High Noon (1952), while Teresa Wright won the Best Supporting Actress award for Mrs. Miniver (1942). You can see both of them, once again paired romantically, in The Pride of the Yankees (1942).
Posted by Jennifer Garlen at 4:16 PM