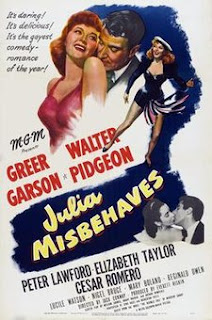 Directed by Jack Conway, Julia Misbehaves (1948) is a charming, frothy romantic comedy that reunites the stars of Mrs. Miniver (1942) for a rather different look at the ups and downs of marriage. Greer Garson kicks up her heels as a bohemian performer long estranged, but not divorced, from husband Walter Pidgeon. The picture also features a host of familiar faces, including Elizabeth Taylor and Peter Lawford as a young pair with romantic issues of their own and great character actors like Cesar Romero, Nigel Bruce, Mary Boland, Reginald Owen, and Henry Stephenson. The cast alone makes the film worth seeing, but Garson and Pidgeon share a delightful chemistry that enriches their scenes together even when their characters are being most ridiculous.

Garson stars as Julia Packett, who long ago left her husband and infant daughter and returned to the stage to make her own way. Broke but persevering on pluck and a steady stream of schemes, Julia is surprised by an invitation to her daughter's wedding and decides to attend. Her mother-in-law (Lucile Watson) hopes to eject Julia from the nuptials, but husband William (Walter Pidgeon) quickly falls for her all over again, much to his mother's dismay. Meanwhile, daughter Susan (Elizabeth Taylor) is preparing to marry an unseen groom while fighting her attraction to the handsome young Ritchie (Peter Lawford).

Julia Misbehaves resolutely focuses on the comedic aspects of its material, but there's a lot of heartache lurking beneath the bubbly surface. Over the course of the picture we learn that Julia married William when she was only seventeen and he was a young soldier abroad. They had happy days together at first, but we get the distinct sense that their separation was orchestrated by William's mother, who disapproves of Julia and schemes to divide them once more by inviting Julia's acrobatic admirer, Fred (Cesar Romero), into the Packett family home. Several scenes touch on the longing Julia has felt to be reunited with Susan all these years, and the conversations between Julia and Mrs. Packett suggest that Julia was forbidden that contact. These details matter because we're supposed to like Julia and understand that she didn't just abandon her family for life on the stage; she was pushed out against her will when she was still very young. When she returns, Julia has become a force in her own right, no longer vulnerable to Mrs. Packett's intimidation.

The story, therefore, is essentially a comeback comedy, with Julia regaining the things she lost so many years ago. In order to survive and become a match for the scheming Mrs. Packett, Julia has learned to be quite a schemer herself. She wheels and deals to get the money she needs; we first see her in a bathtub threatening to commit suicide in order to induce her friend Benji (Reginald Owen) to pay off her debts. She later bamboozles an old gambler (Nigel Bruce) so that she can buy gifts for Susan. The men in the picture also resort to underhanded plots for good causes; William turns out to be just as crafty as his mother and his wife, especially as he works to rekindle the flame of his marriage, while Ritchie hatches plans to frighten Susan into his arms with some help from a friendly bear. Even sweet Susan turns out to have a few schemes up her sleeve at the story's close, much to the surprise of her parents. Everybody, it seems, has to be a trickster sometimes in order to make happy endings happen.

Julia Misbehaves is the final film directed by Jack Conway, who had started in the silent era and gone on to direct a number of Jean Harlow comedies, including Red-Headed Woman (1932), Libeled Lady (1936), and Saratoga (1937). Greer Garson and Walter Pidgeon star in eight movies together, with Julia Misbehaves as their fifth pairing and a rare foray into comedic territory. More typical of their collaborations are Mrs. Miniver (1942), Madame Curie (1943), and Mrs. Parkington (1944). For another film featuring both Peter Lawford and Elizabeth Taylor, see the 1949 adaptation of Little Women, or move on to Father of the Bride (1950) for more of young Liz in a wedding dress.


WHERE TO WATCH: Julia Misbehaves is currently streaming on Filmstruck.
Posted by Jennifer Garlen at 9:46 AM