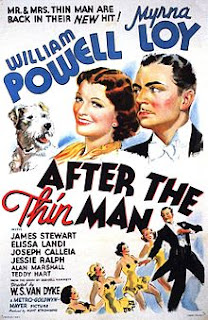 After the Thin Man (1936) reunites director W.S. Van Dyke and stars William Powell and Myrna Loy for a sequel to the 1934 hit, The Thin Man, in which Nick and Nora Charles first cracked wise and drank heavily through a crime-solving adventure. We pick up right where we left off at the end of the first movie, with Nick, Nora, and Asta on a train to California, which makes the first two films a great double bill, even though they were released two years apart. After the Thin Man offers more of everything that made the first picture such a success, with the wealthy couple boozing their way through the new year and a series of homicides. Along for the ride are a number of familiar classic stars, including James Stewart, Joseph Calleia, and George Zucco, as well as Elissa Landi as Nora's troubled cousin, Selma.

Nick and Nora (Powell and Loy) arrive in San Francisco for New Year's Eve only to find that Nora's cousin, Selma (Elissa Landi), is in distress after the disappearance of her faithless husband, Robert (Alan Marshal). Nick has no trouble locating Robert and his mistress at a crowded hot spot, but then Robert turns up dead in front of Selma's house, and it looks like Selma might have killed him. Her longtime admirer, David (James Stewart), arrives on the scene to help, but Robert is just the first corpse of the mystery, and two more rapidly follow. With plenty of suspects on hand, including sketchy businessman Dancer (Joseph Calleia), jealous loser Phil (Paul Fix), and sinister Dr. Kammer (George Zucco), the police have their work cut out for them, even with Nick and Nora's help.

Much of the comedy of this outing lies in the contrast between Nick and Nora's social sets, whom we first see set against each other and then brought together thanks to Robert's shady habits. Nick knows every low-life, ex-con, and purse snatcher in town, and even the guys he sent to prison seem to like him. When Nora is greeted by a well-heeled couple in a passing car, she wryly tells Nick, "Oh, you wouldn't know them, darling. They're respectable." It turns out, however, that Nora's relations are not all that respectable themselves; they merely preserve the appearance of respectability while engaging in coercion, blackmail, adultery, and obstruction of justice. Selma's philandering husband is up to his neck in self-made trouble, but Selma's mother (Jessie Ralph) bullies and manipulates Selma into keeping quiet about his disappearance and his behavior. The rest of Nora's relatives are just antiquated bores; poor Nick has to make up both sides of the conversation when he's left alone with a table full of snoring, elderly gents after a family dinner party. It's little wonder that both he and Nora prefer Nick's more exciting acquaintances.

Asta's domestic woes feature as an odd running gag throughout the film, creating a canine version of the plot's themes of adultery, betrayal, and romance gone wrong. Asta returns from his Christmas travels to find that Mrs. Asta has produced a litter of puppies, but one of the bunch looks suspiciously like the Scottish Terrier who keeps sneaking onto the property. Asta chases his rival off repeatedly but never seems to get rid of him for good. Perhaps it's the stress of his romantic frustrations that makes Asta snatch and then eat part of a vital clue. Nick and Nora, who lavish attention on Asta, never seem to give the slightest thought to Mrs. Asta and her children, which might explain why the neglected pup, shut up in her backyard pen, has gone looking for affection elsewhere. At least the dogs don't resort to murder to solve their problems with each other, and on the whole they're better behaved than most of the movie's humans.

Powell and Loy continue the series with Van Dyke in Another Thin Man (1939) and Shadow of the Thin Man (1941) before moving to other directors for The Thin Man Goes Home (1944) and Song of the Thin Man (1947). For more of a very young Jimmy Stewart, see Wife vs. Secretary (1936) and Born to Dance (1936). Look for Elissa Landi in The Sign of the Cross (1932), By Candlelight (1933), and The Count of Monte Cristo (1934). Penny Singleton, billed as Dorothy McNulty, proves quite a scene stealer as nightclub singer Polly; she would go on to play the title character in more than two dozen Blondie films and provide the voice for Jane Jetson in the cartoon TV series, so be sure to appreciate her early appearance here.

Want to watch The Thin Man series? All of the films are currently available for streaming on FilmStruck.

Posted by Jennifer Garlen at 11:15 AM