Warning: This essay contains spoilers for the film. 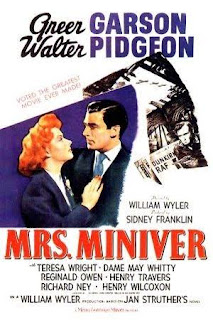 The English rose features prominently in William Wyler's Oscar-winning 1942 film, Mrs. Miniver, where its symbolic value is, at first glance, fairly straightforward. The rose functions as a symbol for England; when the title character allows her name to be given to a rose, she also becomes a symbol for her native land. Mrs. Miniver is a rose, and Mrs. Miniver is England, for England is itself a rose. Through the connection with the rose, the heroine becomes the embodiment of her country, graceful and kind but possessing great resolve and courage, too. The rose has long held a special place in English national sentiment and symbolism, so its significance in Mrs. Miniver comes as no surprise. There is, however, a lot more going on in the film's use of this particular symbol than the suggestive syllogism that equates Kay Miniver, her country, and the flower that grows in the station master's garden. The rose is also a symbol of the dual truths of mortality and permanence, themes that the film works out in characters like Carol Beldon and James Ballard, both of whom have their own connections to Mrs. Miniver's namesake bloom.

The Mrs. Miniver rose and the flower show for which it was grown are major narrative elements in the film. The rose takes center stage as the most important flower in the village's annual show; Lady Beldon does not care who wins the prizes for the other flowers because only the rose is significant enough to matter to her. In fact, she associates herself with the rose in her aristocratic assumption that only she can even enter the competition for the rose category, much less win. Lady Beldon's appropriation of the rose harks back to the Great Chain of Being, a medieval worldview that places everything in a strict correlating hierarchy, with highborn people like Lady Beldon and roses ruling at the top. When the lowly Mr. Ballard enters his own rose, named for a middle-class housewife, he upsets Lady Beldon's old-fashioned ideas about the world in which she lives. England, to her, is a queen, an aristocrat, embodied by the white rose with which she wins the flower show each year. Mr. Ballard's red rose represents a new England, more egalitarian and approachable, grown with devotion but belonging to the people. As Mr. Ballard tells Kay, a rose requires breeding and budding but also horse manure; it can't exist without some earthiness in it. It might seem odd to an American film audience that the flower show goes on even when the village is being bombed, but the rose competition in particular symbolizes the cultural changes that are taking place all over the country and in the socially mismatched love affair between Vin Miniver and Lady Beldon's granddaughter, Carol.

Carol is herself another image of the English rose, just as she becomes another "Mrs. Miniver" when she marries Vin. A fresh and blooming girl, Carol has youthful vitality and great sweetness, qualities often associated with the "English rose" as it describes a lovely woman. Her first appearance in the film also connects her to the symbolic bloom; she comes to the Miniver home to ask Kay if she will try to talk Mr. Ballard out of competing with Lady Beldon in the flower show. Carol recognizes the contest as another sort of war of the roses for her grandmother, but she quickly decides that Lady Beldon is in the wrong for expecting her social position to entitle her to victory. She and Vin meet because of this visit and soon fall in love, but Carol is always keenly aware of the fleeting nature of life and happiness. She knows that Vin could be killed at any time, but she refuses to let that danger prevent a moment of joy. Ironically, it is Carol herself who is killed when she is struck by a stray bullet from an aerial battle. She becomes the rose that symbolizes transience and brevity, the same rose spoken of by Edmund Spenser in The Faerie Queene, by Robert Herrick in "To the Virgins, to Make Much of Time," and by William Blake in "The Sick Rose." Fortunately, Carol understands the theme of carpe diem and makes the most of her short life, enjoying two weeks of married bliss with Vin before tragedy overtakes her.

While Carol embodies the rose as a figure of impermanence, the flower also appears as a symbol of endurance, something that lives on after its creator is gone. James Ballard dies the same day as Carol, just an hour after his moment of glory at the flower contest. He is an old man, a modest station master without much claim to importance, and the triumph in the rose contest is the high point of his life. His death after the show makes Lady Beldon's decision to award him the prize, in spite of her cowed judges having named her the winner, deeply meaningful, for Ballard's name and rose will live on after him in the annals of village history. The individual bloom lasts but a few days, and the gardener who grew it dies, but the Mrs. Miniver rose lives on in the memories of those who survive. Mrs. Miniver herself, the original, also lives on to remember both Carol and Mr. Ballard, for she is England, and England cannot die. Thus the rose is both fleeting and immortal; individual roses wither and fade, just as English men and women fall beneath the bombs, but the idea of the rose, which is also the idea of England, lasts forever. The connection is driven home when someone suggests to Mr. Ballard that "if war comes, it's goodbye roses." Mr. Ballard replies, "Don't talk silly. You might as well say goodbye England. There will always be roses." So there will also always be Mrs. Minivers, even after Kay Miniver lies sleeping in her grave.

In his or her own way, each of the film's most emotionally powerful characters is associated with the rose, and each embodies a different aspect of the English character. Within the context of the film, each of them must die sooner or later, but as characters they live forever, still unfolding their joys and sorrows to audiences some 75 years after the picture's original release. There is still Mrs. Miniver, there is still an England, and there are still roses growing in village gardens. Ironically, the film inspired the creation of a real Mrs. Miniver rose that was itself almost extinct by 2015, save for one plant surviving, in all places, in Germany. Now it is being brought back for fans of Mrs. Miniver and roses to enjoy. Mrs. Miniver and Mr. Ballard might be fictional, but the rose is real, and that seems a fitting conclusion to a story that invests so much of its narrative energy in the symbolic power of a lovely, fragile bloom.
Posted by Jennifer Garlen at 8:08 PM