Classic Films in Focus: THE BRIDES OF DRACULA (1960) 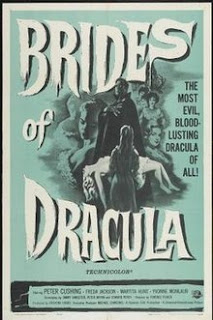 Peter Cushing returns to the role of Doctor Van Helsing for this sequel to Hammer's 1958 reinvention of the Dracula story, but, in spite of the title, Dracula never actually appears. Instead, Van Helsing combats a new undead menace and the relentless obstacle of the doctor's own terrible timing, which goes a long way to make a bad problem worse. While the absence of Christopher Lee's Count is lamentable, and Van Helsing's inability to be on time is maddening, The Brides of Dracula offers a smorgasbord of the usual Hammer delights, including buxom damsels, sublime Gothic ambience, and the perfectly serious performance of Cushing himself.

Van Helsing combats an outbreak of vampirism when the undead Baron Meinster (David Peel) escapes from bondage and turns his pretty young victims into fellow bloodsuckers. The Baron also exacts a terrible revenge on his mother, the Baroness (Martita Hunt), who had kept him a prisoner in the family castle to control his murderous appetite. Once on the loose, the Baron pursues the lovely Marianne (Yvonne Monlaur), who escapes from her first encounter with the vampire and is rescued by Van Helsing. Unfortunately, Marianne's next destination is a girls' school, where the Baron finds plenty of virginal flesh to feed his lust for blood.

The Baron is a younger, more talkative monster than Lee's Dracula, with a young man's energy to match. David Peel's fluffy blond coif and oversized fangs make him a bit silly, but he manages to wreak havoc just the same, especially because Van Helsing never manages to keep his promises to return before sundown and stake the latest vampire victim. We might forgive him for being late the first time, but by the second time he really ought to know better; both of the female vampires might have been dispatched before they ever woke up (which would have made for a much shorter movie but a less frustrating vampire hunter). It's not Cushing's fault that the script relies on his character to be incompetent in order to generate the titular brides, but I find it hard to accept that the one guy who ought to be on top of the problem doesn't seem to know what time the sun sets.

Van Helsing's chronic lateness allows the Baron to corrupt two young girls, first a villager and then one of Marianne's friends at the school. These "brides" run about in white nightgowns and flash their own extra-large fangs at Van Helsing, but they don't have much personality as vampires. Marianne is the only young woman who gets much to do, and she usually does exactly the wrong thing. She takes Van Helsing's instructions to forget what has happened to her so literally that she later becomes engaged to the Baron, not recognizing him as the monster she naively freed from his chains! More interesting, and more tragic, is the Baroness, who pays for hiding her unnatural son when he turns her into a vampire, too. Unlike the other victims, the Baroness retains her horror at her fate, and she welcomes Van Helsing's offer to set things right. Martita Hunt gives the standout performance of the picture in the role, showing the Baroness in a brief but tragic arc of complicity, guilt, contrition, and redemption.

In spite of its narrative flaws, The Brides of Dracula remains a great favorite among Hammer devotees, and many blog lists rank it as the best of the Hammer Dracula films. For the sake of comparison, watch Horror of Dracula (1958) and a couple of the later entries: Dracula: Prince of Darkness (1966), Dracula Has Risen from the Grave (1968), Taste the Blood of Dracula (1970), Scars of Dracula (1970), Dracula A.D. 1972 (1972), The Satanic Rites of Dracula (1973), or The Legend of the 7 Golden Vampires (1974). Terence Fisher, who directed this outing, also headed up several of Hammer's other most memorable pictures, including The Curse of Frankenstein (1957), Horror of Dracula, and The Mummy (1959). Cushing and his frequent costar Christopher Lee appear together in many of these films. You'll find Yvonne Monlaur in Circus of Horrors (1960) and The Terror of the Tongs (1961); Martita Hunt, meanwhile, should not be missed as Miss Havisham in the 1946 adaptation of Great Expectations.
Posted by Jennifer Garlen at 1:42 PM