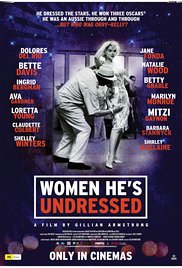 Gillian Armstrong's 2015 documentary film about Hollywood costume designer Orry-Kelly is currently streaming on Netflix, and it offers an intriguing look at the life of the three time Oscar winner, who dressed stars as iconic and diverse as Bette Davis, Ingrid Bergman, Marilyn Monroe, and Natalie Wood. The documentary uses dramatic recreation and a wry performance by Darren Gilshenan as Orry-Kelly to tell the story of the Australian costume designer's early life and long - if uneven - career in Hollywood. While it's obviously of interest to classic film fans with an eye for fashion, Women He's Undressed also provides a straightforward consideration of the problems of being a gay man in Golden Age Hollywood, when many stars and people behind the scenes were driven to keep their personal lives secret for fear of exposure, scandal, and expulsion.

The dramatic recreations are fun, sometimes quite cheeky, and good at conveying Orry-Kelly's sense of humor. The documentary also relies on interviews with various stars and costume designers who knew Orry-Kelly, including Jane Fonda, Angela Lansbury, and Ann Roth. These segments flesh out different aspects of Orry-Kelly's life, including his experience as part of the industry's gay community and his relationships with people like Jack Warner and his wife. One thing we don't see much of is film footage of Orry-Kelly himself, although we do get some still photos and snippets of letters, particularly those between the designer and his devoted mother. Film clips instead focus on the clothes and the actresses he dressed in his most successful work; these are, of course, important to understanding the designer's contributions to cinema, but it would be nice to see more of the real Orry-Kelly in the mix.

The documentary wades right into the ongoing debate about Cary Grant's sexual orientation; Orry-Kelly and Grant - then Archie Leach - knew one another and lived together early in their careers in New York, but Grant snubbed Orry-Kelly once stardom arrived. In fact, Grant really doesn't come off in a positive light, which is sure to upset some viewers, but it's clear that Orry-Kelly was deeply hurt by the end of their friendship, and this film is about his perspective.

Overall, Women He's Undressed succeeds at raising interest in and awareness of Orry-Kelly's life and work; it will send a lot of classic movie fans back to Jezebel, Some Like It Hot, and Gypsy for a fresh look at the ways in which the clothes make the pictures. Bette Davis devotees should, in particular, make time to watch the documentary and consider the designer's crucial role in shaping Davis' look in many of her most memorable roles. If you're interested in seeing more films from Australian director Gillian Armstrong, you might try her 1994 adaptation of Little Women or her 2010 documentary, Love, Lust & Lies.

Posted by Jennifer Garlen at 12:49 PM