Cult Classics: PHANTOM OF THE PARADISE (1974) 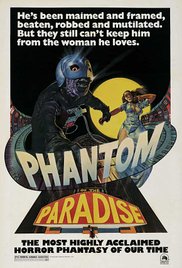 Phantom of the Paradise (1974) is Brian de Palma's musical cult tribute to a number of iconic horror tales, most notably The Phantom of the Opera and Faust, although it also functions as a scathing satire of the music industry and its obsession with sex, fame, and eternal youth. As both writer and director, de Palma gets to make this picture his own weirdly delightful creature, which succeeds at being bizarre while also being surprisingly good. Songs and a devilish performance by Paul Williams enhance the movie's appeal, but each actor here has his or her own charms, especially William Finley, Jessica Harper, and Gerrit Graham. Fans of the many iterations of either Phantom or Faust should not miss this sly, gloriously excessive rock & roll interpretation of themes near and dear to the heart of every classic horror fan.

Williams brings fame and ruin as the reclusive recording mogul Swan, who steals a Faust cantata from the gifted but naive Winslow Leach (William Finley). When Winslow pursues him, Swan has Winslow thrown in prison, where he is abused and driven mad until he finally escapes, and, in a fit of rage, attacks the facility where Swan's records are produced. Horribly disfigured as a result, Winslow haunts Swan's new venue, The Paradise, where he is drawn into an unholy deal to finish the Faust cantata if the beautiful young Phoenix (Jessica Harper) can sing it.

De Palma mixes the plot elements of both Phantom and Faust in his triangle of principal characters; Winslow is most obviously the damaged genius, with shades of Claude Rains' Phantom in the 1943 film, but he's also a Faustian character who makes a deal with Swan's devil, making Swan himself both Faust and Mephistopheles. Phoenix is Faust's Gretchen and the Phantom's Christine, although she, too, nurses a Faustian longing for fame that Swan can exploit. Much of this mingling is inherent in Gaston Leroux's original novel about the Phantom, where the opera being performed by the company is, of course, Faust. Not content, however, to continue the blending of these two texts, de Palma also adds elements of The Picture of Dorian Gray and Frankenstein and several Gothic flourishes straight out of Edgar Allan Poe. The Frankenstein homage gets particularly gruesome and delightful when Goth rockers build lead singer Beef (Gerrit Graham) out of fake audience body parts against a decidedly German Expressionist backdrop. The result, a sexually transgressive blond hunk covered in glittery gold, will look familiar to fans of The Rocky Horror Picture Show (1975), but Phantom watchers will also recognize him as the diva who must be removed from the opera so that the Phantom's chosen singer can take the stage.

The film's other main objective is skewering the music industry, which seems like an easy mark. Rock & roll in particular abounds in opportunities for Faustian bargains, where desperate people trade their bodies, their youth, and even their souls for fame. If Winslow is naive the first time he encounters Swan, he never learns enough to walk away until it's much too late. Even the most minor characters reveal a disturbing willingness to prostitute themselves, from the scantily clad honeys to the constantly changing Juicy Fruits. The band provides an amusing survey of the history of rock, starting out as 50s style greasers, then transforming into Beach Boys clones, and later reappearing to support Beef in Gothic rock garb. Many of the film's musical in-jokes involve Paul Williams, who wrote the songs for the film and then plays the character who steals those songs from the protagonist; he also provides the singing voice for the Phantom during the Phantom's theme halfway through the film. Ironically for a film about the dark side of the industry, Phantom of the Paradise ends up demonstrating the beauty that can result from it. Williams' best songs are haunting ruminations on the Faustian theme of losing yourself in pursuit of something greater, particularly the Phantom's theme, "The Hell of It," "Special to Me," "Old Souls," and "Faust."

Phantom of the Paradise bombed back in 1974, but it has a devoted following now, and it's easy to see why people love this film. Despite its box office failure, it earned an Oscar nomination for Best Music for Paul Williams and George Aliceson Tipton and a Golden Globe nomination for Williams for Best Score. For more early de Palma work featuring William Finley, try The Wedding Party (1969), Sisters (1972), or The Fury (1978). Look for Jessica Harper in de Palma's Suspiria (1977), Woody Allen's Stardust Memories (1980), or Pennies from Heaven (1981). Paul Williams turns up in all sorts of places, from Battle for the Planet of the Apes (1973) to Smokey and the Bandit (1977); he even provides the voice for The Penguin in Batman: The Animated Series. For many fans of a certain age, however, he's best known as the composer for The Muppet Movie (1979), and we have him to thank for "The Rainbow Connection."


*** You can rent Phantom of the Paradise on Google Play or Amazon Instant Video for about $4, depending on the format. If, like me, you fall for the film, you can download the original soundtrack for $10 on iTunes (which you should definitely do).

Posted by Jennifer Garlen at 2:54 PM