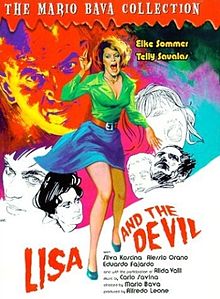 Lisa and the Devil (1973) is certainly one of the weirder Mario Bava films, and with Bava that's saying something, given that the Italian auteur made horror pictures like Kill, Baby, Kill (1966) and Baron Blood (1972). This darkly dreamy meditation on death struggled to find a distributor and ended up being hacked into The House of Exorcism (1975), a much panned attempt to cash in on the success of The Exorcist (1973), but fortunately the original version of the picture finally got released, and viewers can enjoy all its surreal, nightmarish charms. Most film fans will recognize Elke Sommer and the terribly droll Telly Savalas as the title characters, but classic movie buffs will especially appreciate an appearance by Alida Valli as a blind, secretive Countess living in seclusion in a strange Spanish villa.

Elke Sommer plays Lisa, a lovely young tourist who strays from her group into some empty corner of a Spanish city, where she first encounters the oddly menacing Leandro (Telly Savalas). From the beginning, Leandro reminds Lisa of a painting of the Devil she has just seen in the city; she fears him, but she cannot seem to escape him. Later she finds herself more or less trapped in the villa where he serves as butler to an aging Countess (Alida Valli) and her handsome but troubled son, Max (Alessio Orano). Other house guests turn up dead, while Max and a mysterious stranger keep calling Lisa by an unfamiliar name. They seem to know her even though she has no memory of them, and, worse, she keeps seeing versions of them as mannequins hauled about by Leandro. Lisa senses that Leandro and the others are a threat to her, but it slowly becomes apparent that her doom has long been sealed.

Some Bava films are more concrete than others, though they tend to share a strong sense of the surreal, and Lisa and the Devil reveals the director diving deeply into the realm of phantasmagoria, a term that evokes the Romantic sensibility of Bava's Gothic dreams. If Samuel Taylor Coleridge or Edgar Allan Poe had been Italian film directors, Lisa and the Devil is the kind of movie they might have made. For some viewers the slow pace and the almost somnambulant heroine will be off-putting, but those who get into the spirit of Bava's offering will know exactly where this story is going and be delighted with the funereal procession. There are, of course, periodic bursts of gory violence, as well as a very unnerving necrophiliac sex scene, but much of the strangest stuff involves the ever-present mannequins, who might or might not be actual people. Bava delights in switching between the dummies and the real actors during shot changes, creating confusion for both the viewer and the heroine. The relentless doubling also highlights Lisa's own mysterious twin, Elena, who seems to have a secret history with the inhabitants of the house.

Elke Sommer is beautiful but generally silent as Lisa; she spends most of the movie either running from uncertain danger or losing consciousness in front of it. She never asks the obvious questions a rational person would ponder in the midst of such a situation, but then we know that she is more a sleepwalker than anything else, a soul cut off from normalcy and perhaps even from life itself. All of the really fun scenes belong to Telly Savalas as the satanic Leandro; we find Savalas nursing his trademark lollipops and injecting Bava's bad dream with a sardonic sense of humor, especially where the mannequins are concerned. Of course he's the Devil; the title tells us as much, and so does his face in the Spanish painting, but part of the joke is that we know he is and the other characters do not. The rest of the cast pop in and out for jump scares, murders, and sexually fraught backstories; the Countess and Max are the most significant of these, although Carlo (Espartaco Santoni) also plays an important role. Alida Valli looks very different as the aged, sightless Countess than she had in earlier roles in The Third Man (1949) or even Eyes without a Face (1960), but she has a fabulous intensity, especially in the final act. 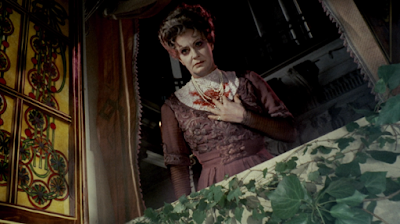