Classic Films in Focus: A LETTER TO THREE WIVES (1949) 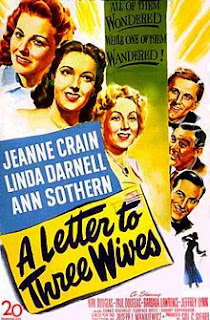 Directed by Joseph L. Mankiewicz, A Letter to Three Wives (1949) sets up its domestic drama with a perpetually absent antagonist who forces a trio of women to consider the central problems of their marriages. This approach makes the homewrecker as mysterious as she is troublesome, but it frees up the screen time for our three heroines, played by Jeanne Crain, Linda Darnell, and Ann Sothern. For husbands we have Kirk Douglas, Jeffrey Lynn, and Paul Douglas, while the supporting cast consists primarily of memorable character actresses like Florence Bates, Connie Gilchrist, and an uncredited - but excellent - Thelma Ritter. Although some of its marital conflicts seem dated and even sexist today, A Letter to Three Wives offers a serious and insightful exploration of the hard work of maintaining a marriage, and its performances reveal the many fears and grievances that can cause a relationship to crack.

The unseen Addie Ross leaves town with a farewell note to her "friends" announcing that she has run off with one of their husbands, but the women won't learn which one until they return from a day long outing with a group of schoolchildren. Former Navy WAVE Deborah (Jeanne Crain) suspects that her uneasiness in the upper class society of husband Brad (Jeffrey Lynn) might have caused him to abandon her, while radio soap writer Rita (Ann Sothern) thinks that her schoolteacher spouse, George (Kirk Douglas), might have grown tired of her higher salary and late nights at work. Lora Mae (Linda Darnell) pretends that she only married Porter (Paul Douglas) for his money and doesn't care if he's gone, but her memories of their relationship reveal that she feels more for him than she cares to admit.

Each wife has a different kind of relationship to her husband and a different problem. Deborah is the most naive of the three, a Cinderella who has married her prince but doesn't know how to handle her new social status or the passive routine of her role as a wealthy man's wife. The film underplays Deborah's frustration at losing her independent, active life in the Navy, but it pulses beneath the surface nonetheless. She seems to pine for a purpose to restore her pride in herself, something her husband can't really give her. Rita has that purpose as a writer of radio programs, but her higher salary wounds her husband's ego, and he bristles at the concessions she makes to her demanding boss. Oddly, Rita and George are the only couple presented as parents, but we never actually see their twins; the movie can't handle the idea of a dual income household actively raising children as part of their juggling act. Like Deborah, Lora Mae is a poor girl who has married into money, but Lora Mae has done so with eyes wide open about the importance of status and wealth. Her husband, Porter, doesn't seem like much of a catch without his fat wallet, but the movie tries to make up for that with a sudden, unselfish act at the end, meant to show that the boorish businessman has a good heart after all.

With its small scope and little action, A Letter to Three Wives depends entirely on its performances, particularly by the three leads. Darnell has the most complicated character to play, and she succeeds admirably, making us understand Lora Mae's pragmatism and prickly nature. She's a beautiful girl in a man's world, and she'll do what it takes to escape the rattling shack by the railroad tracks, even if that means selling herself for a wedding ring. Crain rises above the pathetic quality of her character toward the end, but Deborah can be a bit of a sob sister, and we don't really see enough of her relationship with Brad to understand their marriage. Ann Sothern and Kirk Douglas probably speak the most to modern viewers with their performances; Rita and George are the most like us, striving for a partnership but not always getting there. Douglas has the most to do of the three men; he's more physically present in the story and more compelling than either of the others, and that helps us be more involved in the story of Rita and George. It's worth noting that the film also provides us with three older women to act as foils to our three young ones; Sadie (Thelma Ritter) is a single working woman, Lora Mae's mother (Connie Gilchrist) is a working class widow, and Rita's boss (Florence Bates) is a domineering career woman with a milquetoast spouse. None of the older women seem like models that the younger ones want to imitate, but they show how women have to make do and live on long after youth and love are gone.

Posted by Jennifer Garlen at 4:40 PM