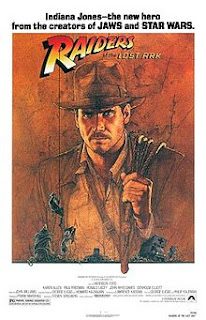 When it comes to movies that deliver on vicarious Nazi punching, it's hard to beat the original Indiana Jones film, Raiders of the Lost Ark (1981). The third installment of the trilogy is good for that, too, but the 1981 picture features all the adventure of a classic serial and all the patriotic verve of WWII era Hollywood. It plays like a feel-good morale booster for a dark time, and that's what makes it such an excellent movie to revisit in 2017. These are the times that try men's - and women's - souls, and sometimes you just really want to watch the Ark of the Covenant melt off Nazi faces.

Of course, Harrison Ford's errant archeologist is a terrible example of an academic; imagine being his department head or an unfortunate student in one of his classes. You'd have to mount your own expedition into the heart of darkness just to get your graded midterm back. His research methods and cavalier attitude toward site preservation probably drive real archeologists to drink. It's clear that Steven Spielberg's movie really wants to differentiate its heroic tomb raider from the villainous ones, which is why Jones is an archeologist who steals things to put them in museums rather than sell them for his own gain.

Archeological ethics aside, Raiders holds up beautifully more than 35 years after its original release. It's still a delight even if you know every line of dialogue by heart. Every fight and action sequence retains its excitement, a testament to the film's pacing and score as well as the performers themselves. Ford is very much the swashbuckling star, but Karen Allen's Marion has tremendous appeal of her own, especially when she's out-drinking men twice her size. Characters in these films have become old friends to many fans, including Denholm Elliot's delightfully dotty Marcus Brody and John Rhys-Davies' genial Sallah. The bad guys are a memorable bunch, too; Ronald Lacey plays the sadistic and creepy Major Toht, while Paul Freeman is the greedy collaborationist Belloq, who enjoys taking relics away from Indy at every opportunity. Both get their glorious and much deserved comeuppance in the finale, when Raiders kicks over into full supernatural mode with the assertion that the power of the Ark is real and seriously hates the Third Reich.

The message of Raiders made a huge impact on Gen Xers, who grew up with similar themes in Star Trek and Star Wars movies, but in the Indiana Jones films the point is more overt because of the explicit depiction of fascism and the fragility of a more historically realistic world. It's hopeful in that we see Indiana and his friends triumph over the forces of evil, but it's also horrific because we know that these bad guys were - and are - real. In a world teetering on the brink of upheaval and awash in dangerous nationalist propaganda, Raiders of the Lost Ark feels both comforting and bracing at the same time. It captures the strange cyclical nature of history, this movie from the 1980s set in the 1930s but still speaking to viewers in 2017. Here we are again, folks. Better grab your whip and fedora.

My friend at Critica Retro is also posting about about #TheResistance at the Movies, so check out that blog, too!
Posted by Jennifer Garlen at 4:51 PM