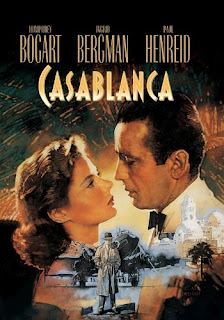 It's December 1941 when Ilsa walks into Rick's Cafe Americain. "In all the gin joints in all the towns in all the world," he complains, "she walks into mine." It is not, however, simply chance, since Rick's Cafe occupies a border space between European chaos and American safety. Through that space Ilsa and her freedom fighter husband, Victor Laszlo, must journey if they are to continue the work of the resistance and survive. It's hard to believe that the story of Casablanca (1942) unfolds exactly 75 years ago this month, especially now, when we seem to be experiencing the history that the ignorant are doomed to repeat. Its message is suddenly seen not in the rearview mirror of nostalgia but up ahead of us, and terrifyingly close. There has never been a better time to visit this film again, but we have to look beyond the sentimental romance and consider the darker warnings that Casablanca sounds.

We generally celebrate Casablanca as a love story, albeit one with a triangular, adulterous twist. Even Lauren Bacall focused on that element in her recorded introduction to a video release of the picture; it's hard sometimes to get past the soft light on Ingrid Bergman's face and the wounded expression on Bogart's as they gaze at each other. There's "As Time Goes By" and that iconic scene with the plane. There are lines like "Here's looking at you, kid." These elements are an important part of the movie's appeal, but they're also the sweetness that helps us take our medicine. The film knows that. As Rick says, "It doesn't take much to see that the problems of three little people don't amount to a hill of beans in this crazy world."

Around and behind the romance, Casablanca sounds an alarm about the chaos threatening to overtake the world, about the danger of being complacent or refusing to stick your neck out for anyone. Rick and Louis both start the film as morally ambivalent characters; while they don't become perfect men, they do ultimately figure out what side they need to be on and how to commit to the fight. As in any time of crisis, there are men who look only to profit from the misery of others, and there are those, like the Nazis, who are eager to command and destroy. Parasites, profiteers, and strongmen thrive on the collapse of civilization, at least in the short term. Ugarte and Ferrari hope to make fortunes on the letters of transit. The pickpocket warns of vultures even as he makes off with the wallets of the unsuspecting. Major Strasser looks to impose Nazi order on a supposedly neutral space and crush Laszlo's resistance. Indifference, selfishness, and outright cruelty abound.

At the same time, we are presented with evidence of the decency and spirit of innocent people trapped in this dangerous situation. Even at his most jaded, Rick stocks his cafe with refugee employees, including Carl and Sascha. He helps the young Bulgarian couple after the girl comes to him for advice about surrendering to the sexual coercion of Louis. There are other moments of humanity in the bar; they seem like minor scenes, but they reinforce the message we are meant to understand. Carl speaks kindly to the elderly couple who practice their English and hope for a better life in America. Yvonne rediscovers her love of country. Of course, Victor Laszlo embodies the noblest, most courageous values of the force for good. He has been captured, imprisoned, tortured, pursued, and threatened with all the fury of the Reich, yet he prevails with dignity and determination. He does not compromise with evil. The scene in which he leads the cafe patrons in singing "La Marseillaise" remains powerful even after 75 years. It is a moment of protest, courage, and hope in the face of unfathomable horror. That, to me, is the very heart of Casablanca and what it means.

Although the film was made after the United States entered the war, the original play, Everybody Comes to Rick's, was written before that, when the country had retreated into an isolationist position and left critical allies like Great Britain and France to face the onslaught alone. One wonders what Americans thought would happen once the Nazis and Japanese finished their march across the rest of the world. The events of Casablanca unfold in the last days of Americans' collective slumber. As Rick laments, "I bet they're asleep in New York. I bet they're asleep all over America." They would be rudely awakened on December 7, 1941, when the Japanese attacked Pearl Harbor. They would be fully conscious by the time Casablanca arrived in theaters in late 1942 and early 1943. It went on to win the Oscar for Best Picture in 1944. By the time people saw Casablanca  they could really understand the message it had to share; they were in the thick of the war and fighting for real. They knew that they, like Rick and Louis, would have to make a stand. They hoped for leaders like Victor Laszlo to show them the way.

It's important to remember that many of the supporting players who helped make Casablanca had personal stakes in its story well before Pearl Harbor. There are very few Americans in the cast. Conrad Veidt and his Jewish wife had escaped Germany in the 1930s because his very public opposition to the Nazis made him a target. (Read this wonderful tribute to Veidt on Birth.Movies.Death for more about his life and devotion to the Allied cause.) He played Nazi villains in Hollywood to highlight the danger they posed. S.Z. Sakall was a Hungarian Jew who fled Hungary for Hollywood in 1940; all three of his sisters died in Nazi concentration camps. (Paula's Cinema Club offers this excellent post about Sakall's life and work.) The film's director, Michael Curtiz, was also a Hungarian, although he had left Europe in the 1920s. Paul Henreid, an Austro-Hungarian, strongly opposed the Nazis and became a US citizen in 1941, while fellow Austro-Hungarian Peter Lorre, who was Jewish, left his acting career in Germany after 1933 and fled to the United States. Even Madeleine Lebeau, who played Yvonne, fled her native France as the Germans invaded. (The last surviving member of the cast, she died in May of this year. You can read her New York Times obituary here.) They were immigrants and refugees who knew too well the nature of the threat the world was facing.

These are things we can ponder as we watch Casablanca in December 2016, with the 75th anniversary of Pearl Harbor also happening this month. In this late age we again find fascism and authoritarian rule on the rise. Around the world, desperate refugees seek to escape war and chaos while the vultures gather to pick over their bones. Disinformation and self-interest keep many blind to the dangers we face, especially in the United States, which once prided itself on being a beacon for democracy, a light in the dark of a troubled world. People are in danger. Freedom is in peril. The basic human rights of millions, both at home and abroad, are being denied. Already we find ourselves facing the same choice as Rick, whether to stick our necks out or look out only for ourselves. We must look to the real world's Victor Laszlos for inspiration. I hope that for you, and for all of us, it will be the beginning of beautiful friendships with like-minded souls. In the meantime, we'll always have Casablanca.

Posted by Jennifer Garlen at 3:51 PM