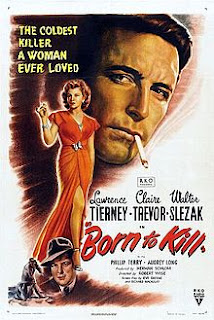 The illustrious Robert Wise directs Born to Kill (1947), a sharp, smart noir drama that showcases the considerable talents of Claire Trevor as its morally ambivalent protagonist. It's an early foray into the genre for Wise, who would go on to direct The Set-Up (1949) and The House on Telegraph Hill (1951) before moving to Oscar winning projects like West Side Story (1961) and The Sound of Music (1965). Unlike those more famous musicals, Born to Kill allows Wise to explore some truly dark territory, and it provides interesting gender reversals of several noir tropes, with Trevor's character in the sway of Lawrence Tierney's menacing homme fatal. Memorable supporting performances from Walter Slezak, Elisha Cook, Jr., and Esther Howard also make this taut crime story worth seeking out, with Isabel Jewell making a brief but pivotal appearance as the good-time girl whose bad behavior sets the plot in motion.

Claire Trevor stars as the newly divorced Helen, who concludes her stay in Reno by discovering a pair of corpses and then skipping town without informing the police. On the train back to San Francisco, she meets the attractive but overbearing Sam (Lawrence Tierney), who makes overtures to Helen but then rapidly marries her wealthy foster sister, Georgia (Audrey Long). Neither Helen's engagement to Fred (Phillip Terry) nor Sam's marriage can cool their lust for each other, even though Helen begins to suspect that Sam is the murderer who left those bodies behind. Meanwhile, a private detective (Walter Slezak) hired by a friend of the dead woman arrives in San Francisco to investigate Sam's involvement in the crime, and Helen is torn between betraying Sam and keeping his dangerous secrets.

Trevor's Helen takes the place of the usual noir anti-hero; like Walter Neff or Frank Chambers, she has a sliver of conscience to struggle against the dark impulses that dictate her fate. Ironically, of course, one of her few generous actions, that of returning a little dog to its home, leads her to find the bodies and make the far less laudable decision to leave town without telling the police. Helen doesn't want to get involved, but soon she's involved so deeply that she can't get out. She knows perfectly well what kind of man Sam is, but she can't resist him, even after he marries her innocent sister. Tierney's male seducer is more brutal than a classic femme fatale; he's always just a breath away from losing his temper and killing someone, although his friend, Marty (Elisha Cook, Jr.), tries to keep him under control. Noir fans will instantly see the irony of having Cook, so often cast as the unhinged type himself,  play the sane one of the pair, while Tierney is really terrifying in his role, and it's clear that he's the inspiration for the picture's title. Moreover, we understand that Helen is a fool to think she can manage him or even survive her entanglement in this compulsive killer's web.

Cook is probably the most familiar of the supporting players, thanks to his many noir roles, but Born to Kill offers several other performances worth noting. Walter Slezak, sounding just a little sketchy with his Austrian accent, plays the detective, Arnett, a slippery philosopher who might or might not have any morals at the bottom of his corpulent soul. Isabel Jewell vanishes too soon as Laury, the girl whose infidelity first pushes Sam over the edge, but she gives the character enough life to highlight Helen's cold self-interest and Mrs. Kraft's devotion. It's Esther Howard as the older woman who proves the scene-stealer of the picture; as the tragicomic Mrs. Kraft, she's brassy and worn, but probably the most deeply sympathetic character in the whole story. Her confrontation with Cook's murderous Marty turns up the tension to an almost unbearable degree, first by forcing us to watch her walk right into a trap and then by making her fight for her life with desperate courage. She's funny, crass, loyal, and utterly heartbreaking in her grief over Laury's untimely death, a perfect foil to Helen's pitiless refinement.

Be sure to note Tommy Noonan in an uncredited role as the bellboy who knows that Mrs. Kraft cheats at cards and Ellen Corby of The Waltons as one of the household maids. For more of Robert Wise's films from the 1940s, try The Curse of the Cat People (1944) and The Body Snatcher (1945), both made under the oversight of horror maestro Val Lewton. Claire Trevor won a much-deserved Oscar for Best Supporting Actress in Key Largo (1948), but you'll also find her in Stagecoach (1939), Murder, My Sweet (1944), and Raw Deal (1948). Lawrence Tierney plays bad guys like the title outlaw in Dillinger (1945) and Jesse James in Badman's Territory (1946) and Best of the Badmen (1951). Don't miss Walter Slezak in the Hitchcock thriller, Lifeboat (1944), in which he puts that accent to especially unnerving use. Esther Howard turns up regularly in Preston Sturges comedies, as well as Murder, My Sweet and Champion (1949). You might recognize Isabel Jewell from her role as Emmy Slattery in Gone with the Wind (1939), but she also appears in Marked Woman (1937), Lost Horizon (1937), and The Leopard Man (1943).

Posted by Jennifer Garlen at 9:04 PM